11/11/2011 - A comic thriller. Eccentric, melancholy and disenchanted characters very much in the tradition of Irish cinema.

The two films are also brothers. In Bruges, is gloomier and meaner, while The Guard is definitely more comical. Both depict that type of eccentric, odd, melancholic and extremely disenchanted humanity that characterises many Irish works.

Dublin-born Brendan Gleeson, professor Alastor 'Mad Eye' Moody in Harry Potter who has featured in memorable films such as Braveheart, A.I. Artificial Intelligent, Michael Collins, Gangs of New York, 28 Days Later, Breakfast on Pluto [+see also:
trailer
film profile], has probably had the greatest opportunity of his career with In Bruges and this film. In the first, Gleeson is a professional killer, in the second he is the guard in the title, Gerry Boyle, a guy with a strange sense of humour who lives in a small isolated town in County Galway where Gaelic is still spoken. A cynical but upright guard, who is brutally sarcastic, who loves to read and have sex with two prostitutes at the same time and who moves in a hostile environment full of corrupt and greedy colleagues.

When news comes of a big cocaine trafficking operation on the West coast, a stiff American FBI agent arrives to support the local police force, Wendell Everett, played by Don Cheadle (Hotel Rwanda [+see also:
film review
trailer
interview: Don Cheadle
interview: Terry George
film profile], Traffic). Gerry Boyle and the black yankee Everett develop a relationship of dislike and respect, as in the best buddy movies, and dialogues are peppered with Boyle’s racist jokes ("I’m Irish. Racism is part of my culture"), met with politically correct astonishment. A great deal of their verbal exchanges is in fact based on a culture-clash: the paradoxal effect of irony is an act of faith, a sort of pact of complicity which only works if the contextual awareness is shared.

With the good ones introduced, here is the baddy squad: the dishonest colleagues and the gang of traffickers, impressively played by Mark Strong, Liam Cunningham, David Wilmot. Many other films have made us used to criminals and/or policemen who philosophise and maybe The Guard slightly exaggerates at times, as when there are discussions over the favourite philosopher (obviously Friedrich Nietzsche‎ is the most popular among the baddies) and when Bertrand Russel’s Gaelic origins are put into question.

For his part Gerry Boyle makes conversation with his terminally ill mother (Fionnula Flanagan) quoting Gogol', Dostoevskij and Pol Pot. It can seem a littlefake or forced but this is after all about the contradictions of Irish people. One smiles and laughs bitterly because there is an immediate complicity with the audience and the director is good at placing other strange characters next to the main ones, such as the young photographer (Laurence Kinlan) who loves to immortalise the crudest images (are we voyeur-spectators?) and the little and wise Eugene Moloney (Mícheál Óg Lane).

A touch of US action, especially in the finale, is finally provided by the same Don Cheadle, who is also executive producer, while the fantastic photography which aptly renders the noir atmosphere is credited to Larry Smith, who has worked with Stanley Kubrick in Eyes Wide Shut and more recently with Nicolas Winding Refn in Bronson [+see also:
trailer
film profile].

more about: The Guard

A comic thriller. Eccentric, melancholy and disenchanted characters very much in the tradition of Irish cinema.

“My rebellion can be found in the character”

After years of unsuccessful attempts at making a career in the film world, John Michael McDonagh presents The Guard, which won the Audience Award at the latest Sarajevo Film Festival.

Dejan Zečević's The Rift launches in Serbia and Slovenia

The first 12 titles of the Berlinale Panorama unveiled 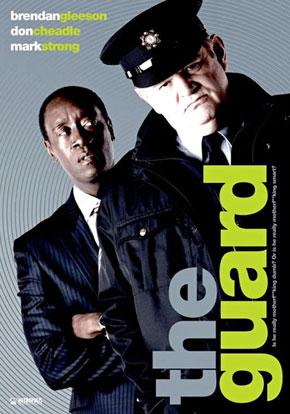