Think of Margaret Thatcher and you will remember Bobby Sands' death following his hunger strike in LongKesh in 1981, the shutting down of the mines and the all-out strike which was so harshly suppressed in 1984, the widespread disorder of the early 80s while Maggie waltzed around with her friend Ronald Reagan, the Falklands War, the riots against Poll Tax of the early 90s, Section 28 against homosexuality. Or you’ll think of a grocer’s daughter from Lincolnshire who entered the House of Commons in 1959 and is the only woman in Great Britain to have acted as Prime Minister (and for a good 11 years). A leader of the Conservative Party who turned around her country’s economy. A model for all women in politics. It all depends on the historical-political perspective.

The Iron Lady [+see also:
trailer
making of
film profile], directed by Phyllida Lloyd (Mamma mia! [+see also:
trailer
film profile]), for which the starring actress Meryl Streep yesterday won an Oscar nomination, contains a lot of that. But there is no real point of view. And this ambiguity is not the only reason why the film is liable to attack. The choice of constructing a film on the memories of a woman now ravaged by senile dementia has been met with various criticism: from the current British Prime Minister David Cameron, to Thatcher’s former PR advisor, Tim Bell, who has defined the film as "rubbish", to the first viewers, some of whom described the film as a "boring biopic with an old lady who drinks tea while hallucinating conversations with her dead husband".

The Iron Lady opens precisely with Maggie in the present, as an 86 year-old (the second Oscar nomination is for Meryl Streep’s make-up by Mark Coulier and J. Roy Helland ), she escapes surveillance, buys butter in a corner shop without being recognised, goes back home and talks to her husband Denis (played by the brilliant Jim Broadbent), who died eight years earlier. An idea reminiscent of the schizophrenic mathematician John Nash who saw an imaginary room mate in Ron Howard’s 2001 film A Beautiful Mind.

Maggie starts signing a pile of her books for the fans, but makes a mistake and signs with her maiden name, Margaret Roberts, and so the memories return. A young girl from a modest family who arrives at Oxford University, marries a successful businessman, gives birth to twins whom she will take little care of, so absorbed is she in politics. First Deputy, then Education Minister, leader of the Conservative Party, admired and feared by her colleagues, hated and confronted by Labour. The sense of the film lies in a sentence delivered by her crafty husband: "Don’t dig too deep, you don’t know what you might find". “I only wanted to make this world a better place", Maggie almost justifies herself at the end of the film.

There is not a moment in the film where the audience is surprised. But the absolute gem of this controversial film, written by Abi Morgan (Shame [+see also:
film review
trailer
film profile]) is Meryl Streep’s interpretation, which is not "just an American actress playing Helen Mirren", as a blogger commented. The liberal actress discovered the iron lady within her and perfectly conveys the former premier’s sense of loss, bringing all possible humanity to a very unpopular public figure. While at the same time showing the arrogance and selfishness of a human being on a constant quest for something that would make her go down in history.

more about: The Iron Lady

Phyllida Lloyd prepares herself for Herself

Why Brexit is bad news for British film exports

Darren Aronofsky teams up with Sebastian Schipper on Undeniable 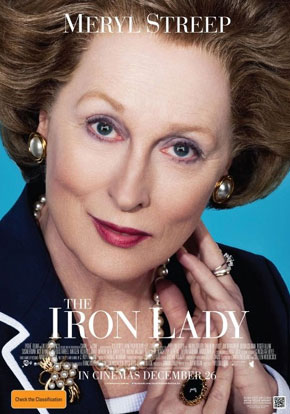 The French filmmaker, who won the Grand Prix in the 2019 Critics' Week, is celebrating the 60th anniversary of the Cannes Film Festival's parallel section dedicated to discovering new talents