02/02/2012 - Panic in Versailles during the first days of the French Revolution. Léa Seydoux and Diane Kruger shine in the sumptuous film with modern undertones that opened Berlinale 2012.

On July 14, 15 et 16, 1789, from the storming of the Bastille to king Louis XVI’s departure from Versailles to Paris at the beginning of the French Revolution, an old order starts to crumble. The inexorable wheel of history turns, resonating like the clock in the first scene of Benoît Jacquot’s latest film, Farewell, My Queen [+see also:
trailer
interview: Benoît Jacquot
film profile], today to launch the competition at the 62th Berlinale.

Benoît Jacquot takes on this historical upheaval, already explored by Scola, Wajda, or even Rohmer, from royalty’s perspective, or more specifically from that of queen Marie-Antoinette, who was presented in a completely different way by Sofia Coppola in 2006. He offers up an esthetic synthesis of several of his stylistic characteristics: his love of literary adaptations (Farewell, My Queen is the tenth out of 20 films), his attraction for costume dramas (after Sade, False Servant, Tosca and Adolphe), and his fascination for portraits of actresses. The film’s main actresses, Léa Seydoux and Diane Kruger, here join the ranks of the filmmaker’s muses, that have included Huppert, Le Besco, Deneuve, Adjani, Kiberlain and Virginie Ledoyen, who also features in Farewell, My Queen.

Farewell, My Queen is the brilliant mise-en-scène of a dying world in the sumptuous setting of Versailles. This cinematic adaptation of the novel by Chantal Thomas offers an original point of view as the intrigue is seen exclusively through the eyes of Sidonie Laborde, played by Léa Seydoux, young reader to the queen, played by Diane Kruger, whom she unreservedly admires. With her, the audience discovers the back stage of court: the gondolas of the Grand Canal besides which members of the second-rate nobility reside in shabby appartments, meals in the kitchen, the luxury of the Petit Trianon, and the Halls of Mirrors. In perpetual movement, the young girl spends July 14 just like any other day. The queen is looking for dress ideas, and etiquette prevails under the tight thumb of Madame Campan played by Noémie Lvovsky. There are but a few signs of the thunder to follow: a dead rat floats in the canal, and “Apparently, they are running out of bread in Paris.” Sidonie lives with her head in the clouds: “It’s as if I was travelling in a marvellous landscape.”

But the next day, the news of the storming of the Bastille throws the palace into panic. “A list of 286 heads chopped off to implement the necessary reforms” circulates in its packed corridors. The queen burns her letters, has her precious stones taken out of their mounts, and packs her bags, while hatred emerges against her favourite and lover Gabrielle de Polignac played by Virginie Ledoyen. Etiquette remains for a day (“The situation is grave, but do not tell anyone, or I will lose the queen’s friendship.”), but disappears on July 16. Theft increases, soldiers and servants desert theri posts, noblemen escape or commit suicide. In this menacing turmoil (“From now on, burning our effigies is not enough for them, they want our skin.”), the king and queen, as well as Sidonie, will have to choose between desire and duty.

Farewell, My Queen is beautifully shot, follows a very good rhythm, and cleverly plays on the contrasts of dazzling lighting. The film revisits history with a deliberate modernity embodied Léa Seydoux’s performance. Jacquot delves into the past without falling into the traps of caricature or glossed-over reconstitution, and the result is both lively and informative. It is, overall, a film marked with the seal of talent.

more about: Farewell My Queen

"The actresses act in the present not in the past"

How do you make a period drama modern? The director behind Farewell, My Queen, the film that opened the 62nd Berlinale, explains how he did it.

Panic in Versailles during the first days of the French Revolution. Léa Seydoux and Diane Kruger shine in the sumptuous film with modern undertones that opened Berlinale 2012. 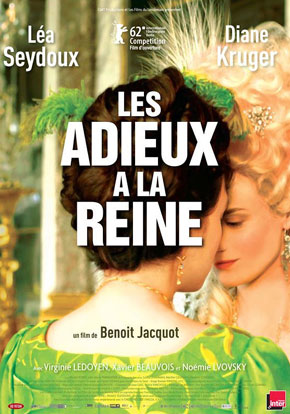