Indignados: The revolution according to Tony Gatlif

An African woman emerges from the sea and runs, as if her life depended on it, across fields and pine-woods. She has just entered Europe illegally, and her adventure accross the Old Continent, from Greece to Spain via Paris, serves as the thread to the very engaged Indignados [+see also:
trailer
interview: Tony Gatlif
film profile] by Tony Gatlif, presented today at a special screening at the Panorama of the 62nd Berlinale.

A very personal adaptation of the long essay Time for Outrage! (original French title Indignez-vous!) by Stéphane Hessel that last year took the world by storm, the new film by the director of Exiles, (best director at Cannes 2004), shows itself to be a striking and effective medium for a socio-political, humanist, and “revolutionary” message based on the values of resistance to exclusion and the dictatorship of money.

Mixing fiction and documentary in a pulsating montage to the rhythm of omnipresent music, Indignados inventively covers a great range of themes and places: precarious immigrant camping sites in abandoned Greek train stations, the mattresses and tents of the homeless on a Parisian pavement, Spanish “indignados” protests, in an echo of the Arab revolutions, and immense abandoned construction sites on the edge of Madrid.

Following Betty, played by Mamebetty Honoré Diallo, wandering from one country to the other, by train and ferry, from the countryside to the city with its opulent shop windows where she tries to escape from the police, the film portrays a Europe that is not well (“Here, we suffer”), the disillusions of illegal immigrants (“Better to be a an animal that an illegal human being”), and citizens who have decided to rebel peacefully (“Today me, tomorrow you, in a world of indifferent fantoms!”, “get up off your sofa, turn your television off, people of Europe, rise up!”).

Very dynamic, Indignados uses quotes by Stéphane Hessel, a member of the resistance during the Second World War before he was deported to Buchenwald: "The current dictatorship of the financial markets threatens peace and democracy”, “The power of money has never been so great nor so selfish”, “The uncontrolled freedom of the fox in the chicken’s coop.” These shocking sentences are in perfect harmony with Gatlif’s unbridled style in which symbols succeed one another. Oranges spin down the road to the sea in memory of the Tunisian graduate who became a vegetable seller, whose self-immolation unleashed the Jasmine Revolution. A soda can is pushed by the wind, sometimes crushed, to represent the illegal immigrants. Brandishing the banner of the revolution ("It’ll be fine, it’ll be fine, it’ll be fine"), Indignados does not shy away from embellishments to hammer in its war cry, but its melting-pot is so alive that it carries away everything in its wake.

Berlin in the sights of Les Films du Losange

The international sales agency has Love in the competition, Our Children at the Certain Regard, and the next Bent Hamer film in its enticing line-up

The French filmmaker yesterday opened the 13th Festival of European Cinema with his film Indignados, screened in Italian premiere on a day dedicated to the dignity of work

Castellitto a star of the 13th Lecce Festival of European Cinema

The event will take place April 17-21, in the Salento region. 10 films in competition and a focus on Slovenian cinema. Premieres include Gatlif’s Indignados

French film festival in Greece up for 'lucky' 13

Greed: "an allegory of the world we live in" 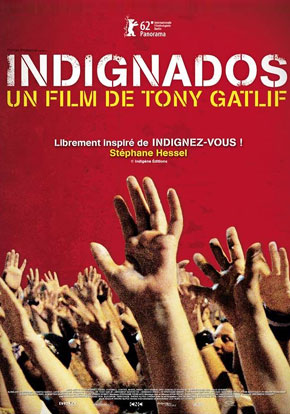