13/02/2012 - Criminals perform Shakespeare in a Roman prison. A fascinating film unveiled at the 62nd Berlinale.

In 76 minutes, two brilliant filmmakers offered the audience in Berlin a screening to remember, with their marriage of several striking tales. Caesar Must Die [+see also:
trailer
interview: Paolo and Vittorio Taviani
film profile], by the brothers Paolo et Vittorio Taviani, without contest outdoes all its competitors in the cinema genre that shows a play by Shakespeare.

The brothers first had the idea of filming the inmates in the Roman high security prison of Rebibbia discovering theatre, when someone told them that they had been moved to tears by a performance of Dante’s Inferno that they had seen there. It had been directed by Fabio Cavalli, thanks to whom the Rebibbia theatre became the respected institution that it is today, attracting thousands of spectators, including school children.

Thus, the film starts with the final scene of Julius Ceasar, after which images become black and white as the prisoner comedians regain the starkness of their cells. We are then taken back in time to discover what they have just lived through, the auditions and rehearsals that have become an integral part of their lives.

If these members of the Mafia and the Camorra so well perform this masculine tragedy by the great Bard, it is because the acts in which Brutus and other “men of honour” conspire against and murder their friend Ceasar out of “duty”, are not foreign to them. Each in their own dialect, they each become part of the Shakesperian tragedy, the insupportable tragedy that makes one sweat, cry, and that fills one’s chest with its immensity. The story of this play is also their own story, which allows the art of the Elizabethan poet to be performed to the full.

Caesar Must Die is the fascinating tale of a prison experience that can bring redemption, as some of its criminals have changed their lives since they discovered theatre, such as the former criminal-turned-actor Salvatore Striano, seen in Gomorra [+see also:
film review
trailer
interview: Domenico Procacci
interview: Jean Labadie
interview: Matteo Garrone
film profile]. But it is also the story of Italians discovering a central figure in their culture, a portrait of the pain of someone who has killed and is locked away forever to face his crimes, and a beautiful hommage to Shakespeare. And then, overall, it is a resounding hymn to the power of art, suddenly revealed to these men previously unaware of its beauty. When the play ends, when after six glorious months the curtain falls, one of the inmates speaks these moving words: “Now that I know art, this cell has become a prison.”

more about: Caesar Must Die

Criminals perform Shakespeare in a Roman prison. A fascinating film unveiled at the 62nd Berlinale.

Italian veterans Paolo and Vittorio Taviani describe their incredible immersion in the Roman prison of Rebibbia to make Caesar Must Die.

Surviving the plague with Maraviglioso Boccaccio 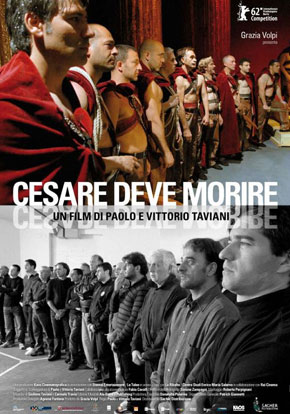