The winner of the Discovery FIPRESCI prize at the Toronto International Film Festival, Axel Petersen’s Avalon [+see also:
trailer
film profile] is an engaging film about terribly repulsive characters. In a word, as Scandinavian as films get.

Janne (Johannes Brost) is a remnant of the 1980s hedonistic culture who just got out of an ankle bracelet (we never find out what he was sentenced for) and he partners with Klas (Peter Carlberg, from Let the Right One In [+see also:
film review
trailer
interview: John Nordling
interview: Tomas Alfredson
film profile]) to open an exclusive night club called Avalon (named after an equally outdated Roxy Music track, which features in one of the film'smore poignant scenes) in the trend-setting Swedish coastal town of Bastad. His principal company is his sister Jackie (Leonore Ekstrand), a boozing bridge and backgammon player.

After they accidentally kill a Lithuanian immigrant worker who was fixing the roof on Klas’s new villa, Janne’s dreams of a new youth dissolve. Klas calls two of the “financiers” of their night club to take care of the body, which consequently brings more intimidation into the atmosphere. The Lithuanian’s girlfriend shows up and Janne invites her to stay in the unfinished villa - instead of chasing her away and getting rid of her dead boyfriend’s things.

This is just one of Janne’s puzzling decisions. He appears to be so void of feelings and even common sense that such choices after all do not ring as being so far-fetched. Ruined by decades of drugs and alcohol, he is now just a shell of a former playboy and bonvivant. Jackie, on the other hand, is a character completelyuncaring about anyone’s thoughts or feelings, an extremely cynical person who doesn’t believe in anything and shows a bit of affection only for her brother.

There is a strong biographical aspect to the film- Brost is as infamous in Sweden for his excessive life-style and serving prison time as he is famous for his film and TV roles. Ekstrand is actually not an actress, but a real bridge player and backgammon champion, which makes her excellent performance all the more impressive. And Petersen grew up in these posh partying circles in the eighties, spending summers with family in Balstad.

Produced by Sweden’s Idyll & Fasad, with participation from Film I Vast, Avalon is handled internationally by TrustNordisk.

We chatted to the well-travelled Swedish duo of Fredrik Wenzel and Jesper Kurlandsky about their joint directorial effort, Charismatic Megafauna

“We wanted to turn up the volume”

BERLIN 2018: Cineuropa met up with Swedish directors Axel Petersén and Måns Månsson to discuss their film The Real Estate

BERLIN 2018: Axel Petersén and Måns Månsson stir up feelings of intense social alienation, where narrative and form unite to create an atmosphere of rejection

Six Swedish teenage witches chosen to save the world

"Nothing short of sensational," said Nordisk Film & TV Fond's CEO Hanne Palmquist, who has reached the project's goals for 18 months in only six

Ciné Nordica: Paris turns the spotlight on cinema coming in from the cold 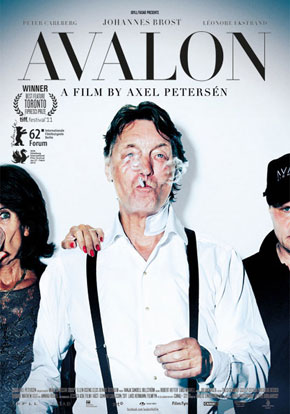