20/02/2012 - A man and a woman in their seventies escape from an old people's home. A romantic, elegant, and refreshing road movie.

Helena (Croatia's Ana Karić) and Jakov (Slovenia's Radko Polič) are two septagenarians who meet in a nursing home in Zagreb. They immediately attract each other and start an old-fashioned kind of courting. Helena is a lady in the true old-world sense, living in the nursing home after she sold her apartment because her son needed money to move to Australia and now never calls. Jakov is more of a tramp material- a jazz saxophone player who traveled the whole world. He still has this adventurous streak and his charm makes it easy for him to convince Helena to get away from the nursing home and go to the seaside.

They meet secretly in the night and get away by riskily walking on top of the narrow wall of a long balcony. They take his old Mercedes and go on the road, almost penniless. After they stop at a gas station, they realize the car's reverse is broken so they can only drive forward.

On the way they meet various characters, as the road movie conventions require, and after having to dump the Mercedes, they get to the coast by bus full of teenagers on a field trip. In the city of their destination they check into one of the numerous hotels on the Croatian coast that Jakov used to perform in. The next day they want to take a ferry to Italy, but Helena makes a discovery that throws a dark shadow over their breezing adventure and ends the film on an ambiguous note.

Mirković employs an effective dynamics, slowly building the love story from initially light, sometimes nostalgic, but always optimistic mood, to a melancholy and (perhaps) tragic ending. At the very beginning there are already seeds of Helena’s and Jakov’s relationship which gains momentum and strength as the film proceeds. When Helena first sees Jakov she is immediately reminded of her first love, a three-day affair when she was 17, a boy whom she couldn't follow when he went on a boat to Italy and out of her life. And maybe that really was Jakov, at least he tells her so in the second act, but it remains uncertain if this is true. Perhaps they are both just pretending that they have found a long lost love again, which would oil up the rusty machinery of romantic feelings.

The idea that they can only go forward, represented by the failure of the reverse gear on the car, is both tender and logical. When you’re 70 years old and go for an adventure like this, it really makes little sense thinking about going back. And it certainly makes it more romantic, as if they were young again, living their lives to the full. Anyway, by doing this they get closer to youth than they have been in decades. Both Polič and Karić are excellent, and they have to be because the film lies squarely on their shoulders. They are equally good in showing their characters as weak and ill, and as energetic and full of life. Production values are strong, the film is stylish and elegant, with just a little grittiness in appropriate moments, adding a refreshing taste of bitterness.

A pill for lethargy

A committed journalist and documentary filmmaker, the director of the Motuvun Film Festival joins forces with Night Boats to make his first feature film, an original success.

A man and a woman in their seventies escape from an old people's home. A romantic, elegant, and refreshing road movie.

Croatia’s Lana Baric and Belgium’s Daan Stuyven topline the film, which is being produced by Mythberg Films and sold by the Hungarian Film Fund

Bobo Jelcic’s feature debut is a deep and multi-layered portrait of a man and a city, boosted by tour-de-force performance of Bogdan Diklic.

The Stranger in us all

Bobo Jelcic’s feature debut is a deep and multi-layered portrait of a man and a city, boosted by tour-de-force performance of Bogdan Diklic 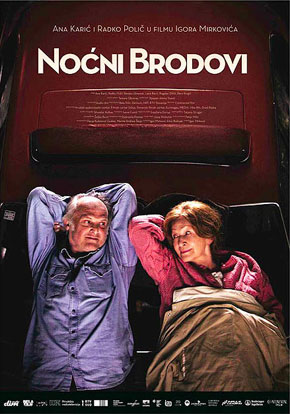