20/02/2012 - Far from the sea against the law of the state. A family of fishermen confront illegal immigration. Special Jury Prize in Venice.

Terraferma, shot entirely on the island of Linosa, where Crialese already filmed Respiro, tells the story of a family of fishermen whose lives are overwhelmed by the arrival of a group of immigrants. Although the docu-drama reference to the arrival of illegal migrants on the Italian coastline may seem like a limitation of the film, Crialese wanted to turn the story into metaphor, to make a film about the freedom of going elsewhere as an expression of the development of our society.

Just like the woman who escaped famine in Ethiopia and from the Libyan prison (played by Timnit T., a real refugee who now lives in the Netherlands), young widow Giulietta (Donatella Finocchiaro) also wants to flee the island for a new life, taking her 20-year-old son Filippo (Filippo Pucillo, on his third film with Crialese) with her.

With the dominant colours of blue and of the brown of the skin of the islanders and of the migrants, Crialese punctuates the film with paradigmatic images that brush with mannerisms but turn out to be powerful and moving: the fishing nets that sink deep into that sea, which we know is studded with the dead bodies of men and women who had hoped for a future, the big eyes of the two women who confront and challenge each other, the community of fishermen who come together to say no to a state that wants to stop them from saving people in the water, going against the code of the sea, the fishing boat at the mercy of the sea, in search of the mainland.

The director is not involved in an organisation to defend his authors’ rights: “We should fight the system with our work, more than with our names!”

Far from the sea against the law of the state. A family of fishermen confront illegal immigration. Special Jury Prize in Venice.

"Terraferma is a film about the freedom to go elsewhere"

Shooting to start in March on Nato a Casal di Principe 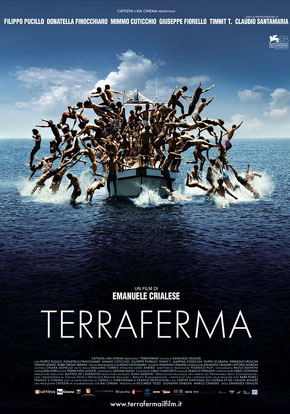