07/03/2012 - A subtle dive into a paranoid East Germany at the beginning of the 1980s. A doctor suspected of wanting to cross over the border. Silver Bear for the Best Director at the Berlinale 2012.

The historical film portrays with great precision the atmosphere of the German Democratic Republic in 1980, and the daily tension of Eastern Germans peparing an escape. The eponymous heroine, interpreted by the always elegant Nina Hoss, is a female doctor from Berlin who is transferred to a hospital in a small town after she applies for a visa to West Germany, where her lover Jörg (Mark Waschke) lives.

Because she is closely watched by state security and devulges absolutely nothing about herself, she lives in gloomy isolation, only bearable because she is so indifferent about a life that she cannot wait to leave. She performs her work with passion, but develops a strange relationship of complicity and defiance with her supervisor Andre (Ronald Zehrfeld), although she knows that he might be watching her, especially as the latter knows the state security agent who keeps turning up at her house with his female colleague who wears latex gloves.

With his famous meticulous attention to detail, in the film’s setting, its objects, and its characters, Petzold lets us observe the ramifications of Barbara’s resolution, the difficulty to lie, her doubts. When Jörg, with whom we realise that she isn’t exactly herself either, tells her of a good time to cross into West Germany, she replies without hesitating that she will be on call at the hospital!

The film is undeniably of high quality. However, knowing Petzold’s talent in superimposing levels of reality to atteign great psychological veracity, and knowing Hoss’ talent in playing characters between reality, projections, and fantasies (as she did for Petzold in the superb Yella [+see also:
trailer
film profile]), one cannot help but be disturbed by the story’s linearity. One can however easily imagine that, for the East Germans who found themselves in Barbara’s situation, the film hits the nail on the head.

“Collapsing regimes and how you can survive in them”

“We are always cleaning our friendship garden”

Karoline Herfurth shoots Sweethearts, her second film on both sides of the camera 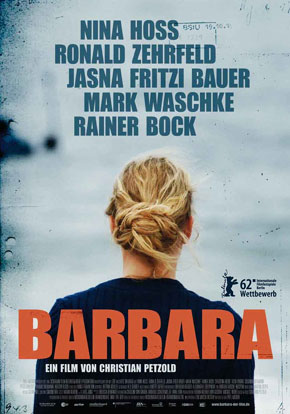