12/03/2012 - Lies and manipulation, sci-fi and comedy. An ingenious and amusing yet minimalist Spanish comedy. Cineuropa Prize at the Arcs Film Festival.

Having attracted attention with his debut feature Timecrimes [+see also:
film review
trailer
interview: Alejandro Miranda
interview: Nacho Vigalondo
film profile], Spanish director Nacho Vigalondo confirms his potential with the sharp and playful Extraterrestrial [+see also:
trailer
interview: Nacho Vigalondo
film profile], which won the Cineuropa Prize at Les Arcs European Film Festival. Unveiled at Toronto, this low-budget film makes the most of its limited means with a story that unfolds almost entirely behind closed doors in a Madrid apartment, a cast limited to four lead roles and a supporting role, and an extraterrestrial invasion that is invisible except for a spaceship stationed in the sky. The director gleefully plays with this minimalist cocktail to weave a very creative plot that reuses the mechanisms of science fiction classics by inserting them into an amusing vaudeville where lies and manipulation rule.

The film immediately sets the scene: a man wakes up very late in the day, unable to remember how he has ended up in a woman’s bed. The embarrassment is palpable between Julio (Julian Villagran) and Julia (Michelle Jenner), but the situation soon takes a more worrying turn: the telephones, television and Internet no longer work and, from the window, the streets look deserted. A radio message asks citizens to wait for the emergency services and a huge flying saucer looms over the Spanish capital.

All the inhabitants of the apartment block have left, except for the mistrustful Angel (Carlos Areces). With no option but to sleep over at Julia’s apartment (on the sofa this time), Julio is surprised the following day by the arrival of Carlos (Raul Cimas), the young woman’s boyfriend. She lies to her lover in order to explain Julio’s presence. But jealous Angel is a threat to this secret. As the extraterrestrial invasion fuels the anxiety, discussions and hypotheses of the four protagonists, Julio and Julia convince Carlos that Angel is perhaps an infiltrated extraterrestrial. There follow multiple twists and turns, a love story, bomb explosions, a few car expeditions through the streets, low blows and reprisals, the discovery of a television controlled by other survivors (but are they human?), more romantic lies and settling of scores…

Vigalondo handles all these far-fetched events with enough subtlety to preserve the minimal dramatic credibility needed for a series of humorous bursts fuelled by the discovery of accessories like a tennis ball machine for sending messages and a huge jar of peaches in syrup with multiple uses. Bordering on a parody of genre films (doors are barricaded, the water is cut off, they study the map of the city to organise itineraries with the watchword "We’ll stick together, at all costs", people are suspicious of each other, characters are intensified…), Extraterrestrial turns out to be an entertaining and ingenious quirky comedy.

The dialogues and acting are perfectly in tune with the sober but imaginative directing (there is a film within the film with Julia’s movie camera) of a feature that has all the ingredients to appeal to a wide audience, in particular teenagers, without nonetheless renouncing its link with an auteur cinema that skilfully zigzags between screwball comedy and baroque fantasy in the style of Alex de la Iglesia. It goes without saying that we’re very much looking forward to Vigalondo’s next project, which promises to be very ambitious.

Produced by Sayaka Producciones with Apaches Entertainment, Extraterrestrial is sold by Wild Bunch.

Lies and manipulation, sci-fi and comedy. An ingenious and amusing yet minimalist Spanish comedy. Cineuropa Prize at the Arcs Film Festival.

“I would rather that my films generate discussion over mere praise”

The director of Timecrimes is back with Extraterrestrial, a romantic comedy with a UFO hovering in the background. A low-budget film with a great sense of humour.

Nacho Vigalondo brings his brand of humour to this Netflix original; starring Quim Gutiérrez and Clara Lago, it’s an adaptation of the comic book series by Santiago García and Pepo Pérez

Nacho Vigalondo shooting the series The Neighbor for Netflix

The protagonist of this comedy, a screen adaptation of Santiago García and Pepo Pérez’s comic of the same name starring Quim Gutiérrez and Clara Lago, is an everyday superhero

Shrouded in the utmost secrecy, the Spanish filmmaker is shooting his fourth movie in Canada; the fantasy co-production stars an international cast toplined by Oscar winner Anne Hathaway

Nacho Vigalondo’s Open Windows is a co-production involving Spain, France and the United States, shot in English and with US stars such as Elijah Wood and Sasha Grey heading up the cast

The Cantabria-born director's third feature, currently being shot in English and starring Elijah Wood, is to add a twist to the genre by telling the story via a computer screen

The actor-turned-director’s debut film will be distributed online via Filmin, on DVD via Cameo, and in cinemas via Jaleo Films. 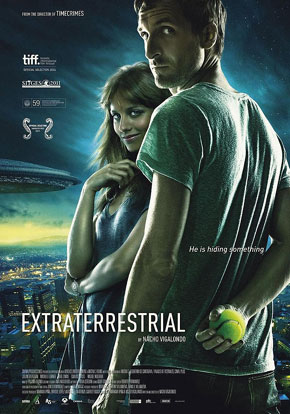