20/03/2012 - The Nazis were hiding on the moon, and now they're back. An entertaining Finnish science fiction film has been making waves since its premiere in Berlin.

It is 2018 and a spaceship lands on the Moon, with the aim of bringing the first black man, model boy James Washington (Cristopher Kirby) to Earth’s satellite as a part of re-election campaign of the Sarah Palin-like US President (Stephanie Paul). As they get out, Washington’s partner, a real astronaut, suddenly gets shot. By a Nazi.

Washington is captured and brought to the Nazi base on the dark side of the Moon, a huge structure in the shape of swastika. It turns out, through the lecture of pretty Renate (Julia Dietze), that after the defeat in the Second World War, the Führer brought the best of his people to the moon to wait for a new chance to conquer the world. The current Führer is Kortzfleisch (Kier), a man with too little self-confidence to stop the aspiring officer Adler (Götz Otto), Renate’s boyfriend, from taking his place.

The Reich scientist, Renate’s father (Tilo Prückner) tries to extract information from Washington about who sent him and why. He finds his smartphone, which he connects to a huge obsolete computer and realizes that it can help finally complete a mammoth flying battleship necessary to invade the Earth. He also injects albino pigment into Washington in order to "repair him" and gets a bleached African-American. Adler decides to go with Washington to Earth, to get more of "those small computers".

The premise offers numerous opportunities, and while many have successfully been used, many have also been missed. Iron Sky pulls out all the stops in laughing at right-wing philosophy in general, and some public figures in particular. It parodies everything from Dr. Strangelove to Star Trek to Terminator to YouTube Hitler spoof clips, and eventually itself. The first part on the Moon works best, the second act (on Earth) is lagging, but the film makes a comeback in the final, epic space battle.

Partially crowd-funded, with contributions from Eurimages, MEDIA, and funding bodies of co-producing countries, Iron Sky looks good (although some of the CGI feels like it's missing a layer or two), but has a cheap B-movie sensibility that is one of the things that prevents it from becoming more than a passing laugh. There are many worse ways of spending 93 minutes, but hurry up - most of the jokes will be old soon, and some already are.

In the run-up to the first edition of Brussels’ Frontières Market, Cineuropa talks to Finnish producer Tero Kaukomaa, who is preparing the sequel to his genre hit Iron Sky

For his science-fiction sequel, Iron Sky director Timo Vuorensola already raised US $182,000 on the Internet

The Nazis were hiding on the moon, and now they're back. An entertaining Finnish science fiction film has been making waves since its premiere in Berlin.

From a steamy sauna to the world screen

Finnish director talks about inventing a local sci-fi from scratch, starting in 2006, how it was saved by crowd funding and is now selling in more than 70 territories.

Interview: Ilja Rautsi • Director of The Night of the Living Dicks 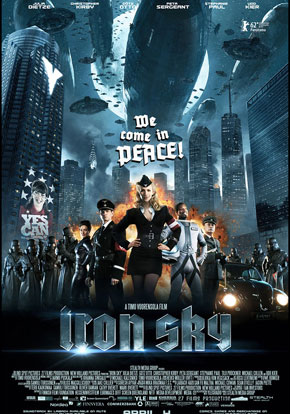