Diaz - Don’t Clean Up This Blood

10/04/2012 - A European co-production to give an account of one of the most serious incidents of recent Italian history.

Like the famous bone in slow motion tossed by the hominid in 2001: A Space Odyssey, a small glass bottle opens Diaz - Don’t Clean Up This Blood [+see also:
trailer
interview: Daniele Vicari
film profile], which recurs several times in Daniele Vicari’s film , and is thrown in a parable which will become a hyperbole. That bottle, which brushes past a police car in front of a school, will be the pretext for a bloody attack on the No-Global activists during the Genoa G8 in 2001 (200,000 people from all over the world).

Diaz - Don’t Clean Up This Blood reconstructs the facts on the basis of the court proceedings and sentences given by Genoa’s Court Of Appeal in 2010. Sentences which condemned all those at the top of the police’s chain of command who took part in what was defined as the "Mexican butchery" by the only policeman who admitted to the violence, vice chief Michelangelo Fournier. However, to this day no one has assumed responsibility for what happened, and many of those suspected have progressed in their career and have been promoted, despite the charges. While that antagonistic movement which ten years ago had in some way predicted the economic crisis, has its continuity in today’s Occupy Movements.

In a fortunate combination of ingredients – video documentation, historical reconstruction and fiction – which denotes a mastery of the cinematographic language reached by the director in his fourth feature, Diaz traces the triangle formed in Genoa during those three days between the police, activists and observers: Luca (Elio Germano) is a journalist who leaves for a Genoa which has been left devastated by the news of the death of the young Carlo Giuliani during the clashes. Etienne (Ralph Amoussou) and Cecile are two French anarchists who played a leading role in those days’ clashes. Nick (Fabrizio Rongione) is a French businessman who has come to Genoa to attend a seminar by the economist Susan George. Alma (Jennifer Ulrich) is a German anarchist who, after having taken part in the clashes, takes care of missing people together with Marco (Davide Jacopini) and a young lawyer from the Genoa Legal Forum. Anselmo (Renato Scarpa) is an old militant of the union. Max (Claudio Santamaria) commands the 7th police unit and cannot wait for it all to be over. They will all find each other on the night of July 21, 2001, when hundreds of policemen break into the school used as a dorm.

Extremely crude images of the violence in the school (the police used the "tonfa", T-shaped truncheons capable of causing very serious injury), are followed by those of the psychological violence, even more cruel and senseless, perpetrated in the Bolzaneto barracks, where they brought those who had been stopped. Or rather, the ‘prisoners’, as they were defined by a police officer in a wiretap. Because those locations, (in the film divided between Bucharest, l'Alto Adige and Genoa itself) were a real battle scene.

It can’t have been easy for the screenwriters (the director himself together with Laura Paolucci) to extricate themselves from all that material. And yet, Vicari did not let himself be intimidated and assembled hundreds of testimonies to construct a story capable of involving the viewer and filling him with indignation. Achieving an admirable anti-ideological balance. That little bottle is a testimony to the mistake of ambiguity made during the pacifist movement with regards to the violence of the black bloc. Were they an integral part of the movement or should they have been stopped and removed by the anti-G8 demonstrators?

With a war movie style of directing, Vicari skillfully manages a good palette of young Italian, German, French and Belgian actors, who seem to be very well understood in their roles and who render the main characters’ mood in those moments. So much so that it is difficult to distinguish the moments of fiction from the real inserts. In the third millennium image is increasingly about taking part, witnessing. After having seen this film/indictment one can say: "I was there. I saw".

more about: Diaz - Don’t Clean Up This Blood

"What does it mean to live in a Democratic country?"

"Everything we showed in the film really happened" explains the director of Diaz - Don't Clean Up This Blood.

Diaz - Don’t Clean Up This Blood

A European co-production to give an account of one of the most serious incidents of recent Italian history.

Vicari is directing nine actors inside their own homes, after having sent them a filming kit; the movie explores the emotions of four couples confined to their abodes

Presented as a special event at the Lecce Film Festival, the first full-length film by Alberto Fiorillo is an intricate psychological thriller, featuring Alessio Boni 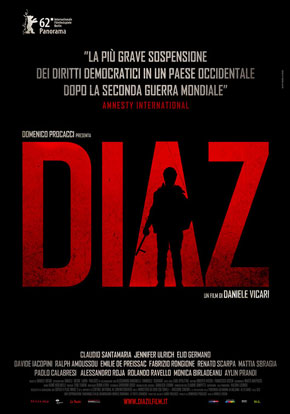