Augustine: Anatomy of a female sexual awakening in the Belle Époque

French director Alice Winocour debuts in the feature-film world with Augustine [+see also:
trailer
film profile], a noteworthy drama set in the early years of the Parisian Belle Époque. The film, which competed in the official section of the Stockholm Film Festival, is based on the real-life case of one of the most well-known patients of the celebrated Doctor Jean-Martin Charcot, considered to be one of the fathers of modern neurology.

After suffering a violent and dramatic attack in the mansion where she works as a servant, the young Augustine is brought to the Hôpital de la Salpêtrière, where she is diagnosed with a “uterine hysteria” by the prestigious Charcot (played by Vincent Lindon). Already during her first night in the centre, the young girl realises the absolute devotion that the female patients feel towards the distinguished neurologist: “Here, you don’t pray to God, but to Charcot,” one of them advises her.

The doctor doesn’t delay in showing special interest in Augustine’s case, intrigued as much by the dramatic quality of her psychomotor attacks as he is by her exceptional response to hypnosis. Nevertheless, the narration continues to gradually and subtly suggest that the doctor’s interest in his patient can't escape the enigmatic sensuality exuded by a young lady who, as is highlighted in several scenes, hasn’t yet had her first period, in spite of being 19 years old.

In this way, the therapy continues to fluctuate dangerously between transference and interdependence, as the neurologist takes advantage of the unique case to attract the attention of members of the Académie des Sciences, from whom he wishes to obtain funding to modernise his hospital. Thus, at the same time as Charcot offers the young lady a preferential and especially careful treatment, he submits her to disgraceful therapy sessions in front of numerous colleagues. Augustine, for her part, understands the importance that her case has for the doctor and begins to take advantage of her position in order to exercise a certain influence over him.

Scientific research, eroticism and power games all play their part in this intelligent screenplay by Winocour. The work, as a whole, also benefits from the admirable work of cinematographer Georges Lechaptois, who splendidly captures elegant interior shots by the light of the candelabra as well as filming fascinating shots of exterior wooded areas shrouded in fog.

Equally outstanding is the enchanting and sensual performance by the young Soko, a popular actress and singer in France, who was nominated for the César Award for Most Promising Actress in 2009 for In the Beginning [+see also:
film review
trailer
film profile] by Xavier Giannoli.

Augustine: Anatomy of a female sexual awakening in the Belle Époque

“You can be a good mother and a good astronaut”

France’s Alice Winocour puts her name to an original and very well-executed film on space exploration, painting a portrait of a female astronaut and her daughter

Pathé will be at the EFM to offer a sneak peek of Matthieu Delaporte and Alexandre de la Patellière’s new film, as well as Proxima by Alice Winocour

A Dharamsala and Darius Films production to be sold by Pathé, the film stars Eva Green, Matt Dillon, Lars Eidinger and Alexei Fateev 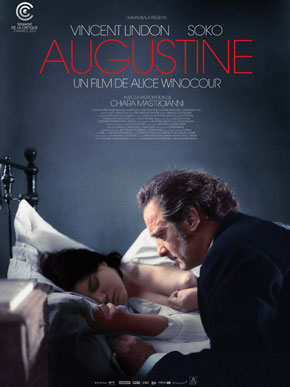