La bataille de Solférino: A mother, a father, two children and a country

May 6th, 2012, the day of the election of the French President. Supporters of François Hollande and Nicolas Sarkozy gather in front of the headquarters of their favourite candidate, slogans are chanted, flags fly in the wind and in the middle of the crowd, a young filmmaker shoots her first fiction feature film, La bataille de Solférino [+see also:
trailer
film profile], screened yesterday in competition at the 11th Paris Cinéma Festival after its presentation in the ACID selection in Cannes. By delving into the heart of the reality of a great national event and a story revolving around two separated parents fighting over the custody of their children, Justine Triet builds an ambitious and hybrid work, quite fascinating because of its fiery modernity, which contrasts sharply with the wisdom (or conformity) of the great majority of French productions.

It all starts in the chaotic apartment of Laetita (Laetitia Dosch) who is giving instructions to an inexperienced baby-sitter entrusted with looking after her two very young daughters for the day. Spirits are high because the young woman, a journalist for a news channel, is covering the second day of the presidential election from the headquarters of the Socialist Party, on the Rue de Solférino, in Paris. A disruptive element appears at the bottom of the building, the children's father, Vincent (Vincent Macaigne), with whom her relationship is very tense. Laetitia goes to work, weaving her way through Paris on a scooter with her cameraman, doing one interview after another with militants and supporters, whilst at home, the situation becomes more complicated as Vincent (waving a letter from a judge) desperately attempts to get into the apartment to bring gifts for his daughters, the overwhelmed baby-sitter keeps calling Laetitia and a neighbour whom she called to gently get rid of the father. Tension rises as the day goes by and all the protagonists (including the children) find themselves in the midst of the crowd on the Rue de Solférino, personal problems coming to an explosive peak as François Hollande’s victory unleashes a wave of enthusiasm around them. And the story lasts until the end of the night (including Vincent being arrested by the police and a final interview for Laetitia on the Place de la Bastille). Back at the apartment, a peaceful solution is finally worked out through dialogue, thanks to Laetitia’s new partner and one of Vincent’s friends.

Shouldering the challenge of not being crushed by her cinematographic models (we are inevitably reminded of the Nouvelle Vague or the Dogme) and using her imagination, Justine Triet delivers a very fresh first feature film whose only flaws (a screenplay occasionally flirting with the improbable) are largely forgotten thanks to the dynamism of the story and the originality of the parallel narration of an individual conflict and the collective and political destiny of a country, all brought together by the song Lose Your Soul by Dead Man’s Bones (Ryan Gosling’s band). Produced by Ecce Films (which also recenly handled La Fille du 14 juillet [+see also:
film review
trailer
film profile]), La bataille de Solférino will be distributed in France by Shellac on September 18th.

more about: Age of Panic

Sara Forestier and Laetitia Dosch to star in Playlist

The two actresses are toplining the feature debut by comic-book author Nine Antico; the film is currently being shot and is being produced by Atelier de Production

Shooting due to kick off on Marc Fitoussi’s Appearances

Laetitia Dosch and Sergei Polunin star in a film produced by Les Films Pelléas, co-produced by Versus and sold by Pyramide 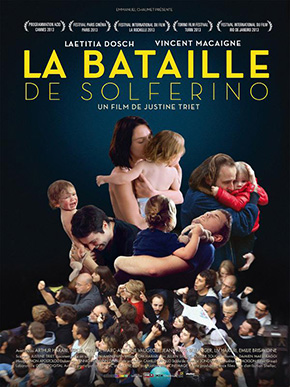