Not the easiest of challenges for Luciana Littizzetto and Fabio De Luigi to follow in the footsteps of Franca Valeri and Alberto Sordi. Neither was the responsibility Massimo Venier carried of bringing back to life characters that were first conceived fifty years ago by one of Italian comedy’s greatest maestros, Dino Risi. Aspirante vedovo, will be hitting Italian movie theatres this week, born from the motivation of a great challenge.

“When producer Beppe Caschetto asked me to remake Il vedovo, I refused. I thought it was a crazy idea,” director Massimo Venier said. “But then I thought about this stupendous story, these fantastic characters, about the possibility of telling how things have changed today, but also how things have remained the same.”

Italy in the 1960s was a country in the midst of an economic boom. Today, the country is going through crisis, but speculation is still the same and construction still happens without rules. Venier’s Milan is a building site. As construction for Expo 2015 gets under way, businessmen without scruples take advantage of the situation to make money. Among these, Alberto Nardi (Fabio De Luigi) who presents himself as a dynamic and successful man, even if in reality, he is a buffoon who does little. Hi wife is the rich and powerful industrialist Susanna Almiraghi (Luciana Littizzetto), who likes to remind him of her status in public as well as in private. She makes him smell their dog’s excrement, humiliates him in front of friends and pays more attention to the electrician than to him.

The only reason Susanna Almiraghi has not divorced this man is because she does not accept the idea of failure. Death would be preferable. This desire between husband and wife (she desires it, he acts on it) is the starting point for this dark comedy which aim is to re-launch a new season of comedic films, tied to Italian-style comedies. “It is a comedy that is very different from comedies made today, far away from the politically correct,” Littizzetto explained, a cynical and cutting humourist himself. “The idea is to put that type of dark comedy which young people no longer know back on the table.”

The Littizzetto-De Luigi duo works well. He, a ne’er-do-well, with grotesque manners, capable of provoking laughter with the smallest of flickers; she, perfect for the part: an almost inhuman, disagreeable and monolithic lady. The essence of the characters has remained intact, as has the sense of grey humanity, which is neither ever completely positive or negative.

Produced by IBC Movie and Rai Cinema, Aspirante vedovo is coming out on October 10, distributed by 01 in 400 cinemas.

Sole a catinelle, produced by Taodue and distributed by Medusa, has sold over two and a half million tickets in one weekend. Producer Valsecchi: “a breath of fresh air for workers”

Filming for Soap opera by Alessandro Genovesi kicks off

After the success of La peggior settimana and Il peggior natale della mia vita, the director returns to the set with favourite actor Fabio De Luigi

Italian cinemas reopen, France and the UK warm up the engines

Nexo Digital launches Nexo+, throwing down the gauntlet to the algorithm approach

Short-film and documentary platform FILMPIXS to launch on 17 February 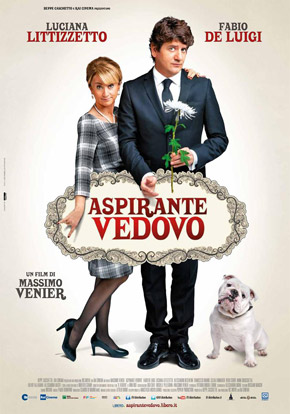