12/03/2014 - Jean-Stéphane Bron’s latest piece of work is something to be cautiously managed, as cutting as it is fascinating

L’expérience Blocher [+see also:
trailer
film profile], which premiered at the last Locarno International Film Festival, is one of those “burning” films, which leaves spectators hanging

To paint a portrait of Christoph Blocher, one of Switzerland’s most powerful men, can hardly have been an easy endeavour. His public image, as the head of the centre right UDC party, one of the small country’s main political units, is well known, but Blocher the private man remains a mystery to most. His rhetoric may flirt with the banal, but the man continues to escape us as he hides behind the walls of his luxurious Zurich abode. The challenge is to document him without him realizing it, in order to stop him from being able to fight back with his most powerful weapon: words. Jean-Stephane Bron has studied his adversary at great length and knows his tactics well. Instead of meeting him with words, Bron has used the strength of images to surprise him. Through images, Bron has been able to explore the multiple facets of a man: a politician, an entrepreneur (one of Switzerland’s most powerful and successful ones) and even an actor.

The director’s previous documentaries include Le génie helvétique and Cleveland Versus Wall Street (presented in Cannes in 2010 and recipient of an award in Soletta). He knows well what the genre’s traps are. One of the most insidious of these is the voice-off, which accompanies images and threatens to gauchely reveal the director’s voice and drown the images out. Bron deprives his subject of his usual antics and covers him up with his own speech, which is well balanced, subtle and surprising rather than mystifying. Bron’s voice is so loud that he becomes a character in his own documentary. Even so, the images manage to dominate the film, and have such power that the spectator is given a key into Herr Blocher’s intimate life. The many moments during which Bron films his adversary in a car, as he makes a phone call or goes through his speeches, shows us much more than what he would probably like to reveal.

Still, the battle is never really a net victory for one or the other. Blocher is dangerously intelligent and even if Bron manages to show the insecurities, which make his subject human, it is never completely clear whether or not his behaviour is truly real anyway. Inside the politician lies a truly great actor. The director is aware of the risks associated with investigating the unknown side of a public figure, which has remained in the shadows. As a result, instead of pretending he is painting a whole picture, the director includes us into his investigation, as a man who is confronted with an ideology he despises, as a director faced with an actor who is too independent. International sales are being taken care of by Les Films du Losange.

more about: The Blocher Experiment

Jean-Stéphane Bron leads us through the darker recesses of the human mind, taking us on a fascinating yet distressing journey which it’s difficult to come out of unscathed

LOCARNO 2017: Jean-Stéphane Bron screens at Panorama suisse an intimate portrayal of a mythical establishment, whose survival depends on the people who support it

Berlin in the sights of Les Films du Losange

The Circle is the big winner for the Swiss Film Award

“I can help artists to realise what they have within themselves” 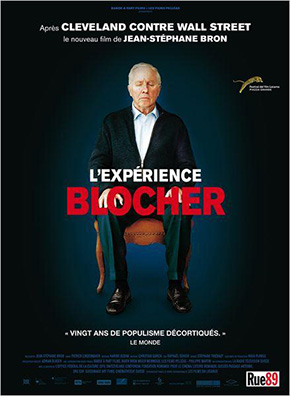