Eat Your Bones: "A little hold-up or a beer?"

19/05/2014 - CANNES 2014: A modern western and an electrified dive into the Directors' Fortnight for Jean-Charles Hue in the extraordinary world of the Yenish community outlaws

Motorbiking without a helmet at top speed through fields with a rifle under your arm, a police car chase on narrow roads, a gas tank running dry, a plan to rob a truck transporting copper, a chaotic settling of scores... The French director Jean-Charles Hue literally electrified the Director's Fortnight today at the 67th Cannes Film Festival with his second feature film: Eat Your Bones [+see also:
trailer
film profile]. In line with the more documentary work of his previous film, La BM du Seigneur [+see also:
trailer
film profile] (2011), the director finds, this time in the form of fiction, the astounding Dorkel family, travellers belonging to the Yenish community, which is considered to be rather brutal and dangerous by their Gypsy and Traveller "cousins". In short, this world is not without fault and is a real UFO barging into the panorama of French cinema, a kind of strange and distant successor of Mean Streets by Martin Scorsese, and a film whose energy blows away everything in its path (flaws included) without abandoning a certain artistic quality.

Jason (Jason François), 18 years old, lives with his mother and his half-brother Mickael (Mickaël Dauber) on a caravan site, in the vast Parisian suburbs. They hunt rabbits, light big fires, drink beers, challenge each other to weight-lifting competitions and set up a big tent in order to prepare the following day for a baptismal ceremony which will see the young man joining the very active Evangelical group. However, it's also the day that the oldest brother, Fred (the very impressive and charismatic Fred Dorkel), returns with a screeching of tyres, having just served a 15-year prison sentence for the murder of a police officer during his arrest for stealing a refrigerated meat truck. With Fred, the old days emerge, those of challenging the rules ("I don't give a damn about society") and respect for the old Yenish traditions (embarking on an adventure in the world of the "Gaje" and standing up to the authorities). And that's how Fred, Mickael, Jason and their cousin Moïse (Moïse Dorkel), who wants to stop the youngest from "still acting the idiot", leave on an alcohol-fuelled, nocturnal and illegal joyride. Recovering Fred's old Alpina in secret underground hideouts (where stolen cars are trafficked), our chatty and restless foursome move in the direction of a copper freight truck with a view to robbing it...

Moving at high speed along the thread of a relatively tenuous plot, Eat Your Bones (an expression which is the ultimate insult for the Yenish community) mixes hyper-realistic documentary material (the marginal lifestyle of the community, their slang, their beliefs and superstitions, their economic fourth world, their evolution towards settling and evangelism, etc) and a striking style which borrows from crime films and westerns. From swerving in zigzags and conversations that disintegrate into violent acts, the film with its fantastic nocturnal scenes creates a unique and fascinating atmosphere which prevails over its (numerous) small imperfections. Because the urgency of the main characters is also that of the director, who succeeds in designing, with unusual oomph, a twilight universe in which the family is a sacred value and in which the most hardened outlaws know that "in life, you have to pay your dues".

Eat Your Bones was produced by the mavericks at Capricci Films, who are also selling the feature film internationally and will distribute it in France.

more about: Eat Your Bones

The shoot kicks off for Lucile Hadzihalilovic’s Earwig

Paul Hilton, Alex Lawther and Romola Garai topline the first English-language film by the French helmer, produced by Petit Films and Anti-Worlds, co-produced by Frakas and sold by WBI

The first feature film by the director who scooped the Prix Jean Vigo in 2016 for The Chasm is produced by Capricci Films, who are also handling international sales

The Black Spot actress will be flanked by Sofiane Khammes among the cast of Just Philippot’s feature debut, a Capricci and The Jokers production that is being sold by Wild Bunch

Tijuana Bible by Jean-Charles Hue is in post-production

Paul Anderson and Adriana Paz star in the new film by the director of Eat Your Bones. A Les Films d’Avalon production sold by Orange Studio

"A contemporary western set in the Western Pyrenees"

Jean Anouilh won the Development Aid Grant at the Cinemed Meetings with Marta, his debut feature project being produced by La Voie Lactée

Filmatique.com, a new platform for US audiences 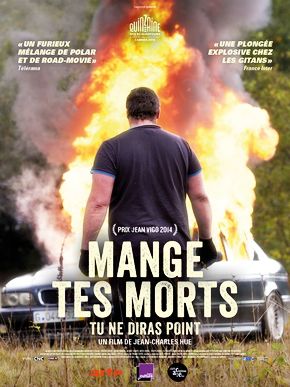