27/11/2014 - Cristóbal Arteaga’s debut work, premiered at Gijón, deals with the existential loss of direction in the stunning landscape of Galicia

Galicia has been portrayed by many. Its majestic landscape has not only been cherished by Lois Patiño’s camera in Coast of Death or, more recently, by Ángel Santos in The High Pressures (New Waves section award in the 11th Seville European Film Festival), but now Cristóbal Arteaga, a Chilean settled in Vigo, has transformed it into much more than just a character: it’s a symbolic space in his debut feature, Faro sin isla [+see also:
trailer
interview: Cristóbal Arteaga
film profile] (lit. "Lighthouse without an island"), a co-production between Chile, Costa Rica and Spain (Intricate Productions), that was screened in the Changing Genres section of the 52nd Gijón International Film Festival. In the reefs, forests and beaches of Cabo Home (home in Galician means “man”) – the name is a statement of principles –, in Pontevedra, is where this existential tale about sanity (and losing your mind), wavering faith and devastating loneliness, was filmed.

Félix (Lois Soaxe) arrives on an island. He’s a Navy mechanic who’s taking over from his co-workers to look after the lighthouse and, while there, to do penance by distancing himself from everything and trying to put his head in order. Félix has profound religious beliefs; he notes in his diary his conversations with God while the solitary days gradually bring him to a spiritual state that he hadn’t planned on. Christianity and its elements are thus very present in Faro sin isla: the lamb, the bloodstains on the door to ward off plagues or the fish (that appear out of water like in a legend that the director heard in Chiloé -Chile-, about a fisherman who found live fish in the mountains, it’s pure magical realism, García Márquez-style).

Arteaga, with one actor in the midst of stunning natural landscape, gradually builds up the decline of this man who, despite the harsh living conditions, tries to keep his faith in an almighty being alive. But the director doesn’t make things easy for the viewer: he wants the audience to interpret and to be active. Thus, the movie doesn’t have one reading or one parallel. It goes from Kubrick to Javier Rebollo through Bresson (Diary of a country priest casts a long shadow here) or movies like Robinson Crusoe, The Machinist [+see also:
trailer
film profile] or Moon [+see also:
film review
trailer
film profile]. It does so with much less resources and with a camera that bobs suspiciously so as to transmit to us the same feelings experienced by this Northern version of Saint Job, lost in his own psychology, facing up to his dreadful ghosts, grief-stricken, his own martyr, tormented by the feeling of guilt that the Church imposed on him when he was born, devoted to constant prayer that no one seems to hear, which he writes down so that, at least, that way it exists.

The frames in Faro sin isla illustrate that this is an intuitive movie that progressed off the cuff from a 40-page script written by its director. That’s what gives it the organic, live, minimalist energy which Arteaga expended in The Sad Smell of Flesh [+see also:
trailer
film profile], which also passed through Gijón, in addition to receiving the Award for Best Film in the Resistencias section of the 10th Seville European Film Festival.

“Spain’s tax situation is a disgrace”

The Galicia-based Chilean filmmaker is presenting his as-yet-unseen debut film, Faro sin isla, in the Géneros Mutantes section of the Gijón Film Festival

Cristóbal Arteaga’s debut work, premiered at Gijón, deals with the existential loss of direction in the stunning landscape of Galicia 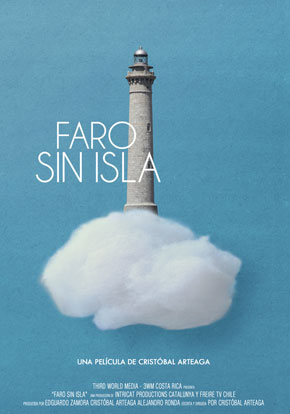