02/12/2014 - The platform for international and Latvian industry and press guests will take place on 12 and 13 December, ahead of the European Film Awards

The National Film Centre of Latvia launches its Riga Meetings, the platform for 40 international industry and press guests to meet with 22 of their Latvian colleagues, which will take place on 12 and 13 December, ahead of the European Film Awards taking place in the Latvian capital on 13 December. Riga Meetings is the country's gateway for international co-productions, offering one-on-one meetings, location tours and information on attractive tax incentives. Latvia is the only Baltic country to offer two cash rebates, which can be used in tandem, on a national and city-wide level (Riga).

"We wanted to maximize the synergy potential offered by Riga's hosting of the EFA awards," comments Dita Rietuma, the National Film Centre's director. "With the Riga Meetings, we are in an excellent position to let the European industry and press know what is happening in Latvia and what the co-production possibilities are."

The event also includes the European Script Meeting for producers, a FIPRESCI conference Films From Latvia In A European Context and master classes by Wim Wenders, Nik Powell and Agnieszka Holland.

The Latvian industry has benefited greatly from the two only cash rebates available in the Baltic Region, offered by Riga City Council and the National Film Centre of Latvia, leading to an increase in international co-productions in the last three years, including Sergey Loznitsa's In The Fog [+see also:
trailer
film profile] and Seung-wan Ryoo's The Berlin File. 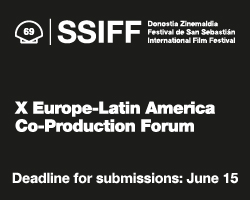