Manieggs – Revenge of the Hard Egg: Parody as a form of tribute

18/02/2015 - A mix of parody and a tribute to Hollywood action movies in this Hungarian action comedy, screened at the Brussels Anima Festival

In the animated movie Manieggs – Revenge of the Hard Egg [+see also:
trailer
film profile], screened at the Brussels Anima Festival and previously screened at the Annecy Festival last summer, two prisoners seek revenge upon their release from prison, where they’ve served a two week sentence for a crime they didn’t commit.

Fast-paced, this irreverent comedy takes us into a world where corrupt police, inept Asian mafias and bizarre secondary characters all mix with assassinations on all sides. And in which, as its title indicates, all of the characters are eggs.

The movie situates the story of an undefined large American city, where our protagonist, Johnny Cupido, together with his loyal friend Harry, will do all he can to satiate his thirst for revenge. Through numerous flashbacks, we gradually enter into the universe created by Hungarian Zoltán Miklósy, where, between sweeping appearances and special attention to music, the various characters that form part of Johnny Cupido’s unique odyssey gradually emerge. The fearful Chinese Dragon Clan, cage fights and a bank robbery are some of the elements that the two protagonists will have to face. At the same time, the movie narrates the parallel stories that develop among the group of violent and at times inept police that follow in pursuit of the protagonists.

With hard-hitting gags, the film balances on the fine line between parody and tribute. Its object of admiration? Hollywood action movies, which it bows to by scorning the most well-known stereotypes. Add to that a sense of humour that, literally, spares no one (or no egg) and a recurring taste for randomly killing characters as an unequivocal nod to American cinema; hence its far from negligible body count. With cultural references from Rambo to Colombo and including Harry Potter, the film quickly gains the approval of the audience, which gets practically no break from the excessively scatological humour.

Irreverent through and through, Manieggs, produced by Hungarian Umatik Entertainment, stands out on account of its lack of sentimentality and its constant critique of the most common clichés that feature in so many of the most famous action movies, good and bad. With no room for a happy ending, Manieggs ends its 90 minutes of film with the same loutishness with which it started. Fortunately, in between, it provokes a lot of laughter.

more about: Manieggs - Revenge of the Hard Egg

The 39th Cinanima kicks off today

The Espinho International Animated Film Festival is screening over 280 titles until 15 November, including the opening film, The Snow Queen 2 by Aleksey Tsitsilin

Manieggs – Revenge of the Hard Egg: Parody as a form of tribute

A mix of parody and a tribute to Hollywood action movies in this Hungarian action comedy, screened at the Brussels Anima Festival

The Haute-Savoie city is getting its fill of fine films this week, with 230 titles on the Festival menu and over 2,000 professionals at the Film Market 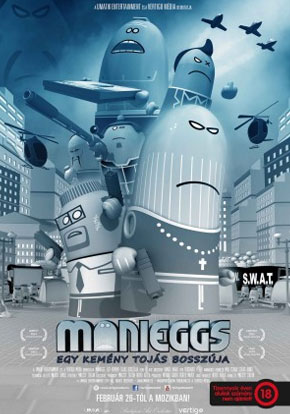 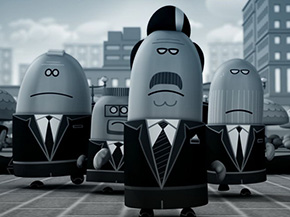 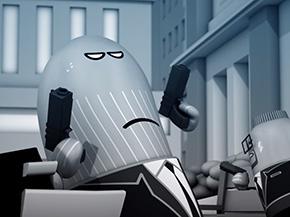 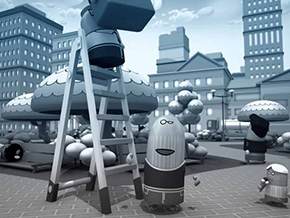 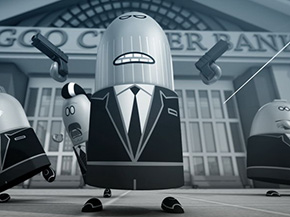