Love: Between the love of filmmaking and making love

The French-Argentinean filmmaker Gaspar Noé succeeded in generating quite the buzz with his film Love [+see also:
trailer
film profile]. Its provocative posters created by Wild Bunch soon stirred up a hornet’s nest when they graphically announced a 3D pornographic film directed by the mind behind the hard-hitting Irréversible. Was this a marketing ploy similar to Welcome to New York [+see also:
trailer
film profile] or a true cinematographic, Nymphomaniac [+see also:
film review
trailer
interview: Louise Vesth
film profile]-like oddity? Having unwittingly been used last year as the VoD launch pad for Abel Ferrara’s film and after the de facto banishment of Lars Von Trier, this time, the Cannes Film Festival “paid to see” Love by reserving a place for it in the official selection as a Midnight Screening, preceded by a very enthusiastic on-stage introduction by Thierry Frémaux, who was clearly happy about the eagerly awaited return of a member of the Cannes family, who had already been selected with his two previous films.

In a theatre packed to the rafters, the audience sat and watched this world premiere, a three-hour story blending deja-vu, a tormented adolescent fable and a pornographic picture story that is more chic than shocking. The real surprise is that, when all is said and done, Love is the director’s least provocative and also least conceptual work. Gaspar Noé strings together prime examples of clumsy writing (unless the dialogue is a sort of misunderstood tribute to X-rated films), clumsy technique (a dull, unimaginative 3D from a bygone era, apart from a poor attempt at simulating spurting, an incomprehensible retread after the ejaculation featured in Enter the Void [+see also:
film review
trailer
film profile]) and clumsy sound (a musical tapestry riddled with clichés, which seems to constantly cause the actors to stumble). In terms of the cast, the actors get the job done, and by that it must be understood that they literally bare all and get down to business.

Should we at least talk about a feast for the eyes, as the story revolves around a man suffering as he reminisces about a love lost, seen from the perspective of his adult life (as is evident from his moustache), which he regrets and for which he only has himself to blame? Maybe. The sex scenes are indeed filmed with no holds barred, but without any close-ups of the penetration. The directing and the aestheticised settings courtesy of Benoît Debie are very different from those found in typical porno flicks. Some might say that it is less vulgar as a result… maybe. We can also concede that the film is quite simply not aimed at the same market. It is true that the sex is beautiful, but repetitive. The focus is placed particularly on the male erection, and Love is uncompromising when it comes to its erotic charge, with which it plays it safe: perfect bodies, abounding threesomes and female neighbours pining for sex almost from the get-go. As soon as there is a more deviant scene, such as an encounter with a transsexual, it is only used for comedic effect. The fantasy mill is not lacking wind in its sails, but unfortunately, it kicks its heels a little. And where is the love in all of this? It is, after all, the real subject of the film, and it is also the feeling that sparks the filmmaker's passion for cinema that he has chosen to make in his own, unique way. Gaspar Noé is, first and foremost, an auteur.

It would be putting it mildly to say that the emotion that is meant to enhance this story won’t sit well with everyone. Many will not manage to succumb to the naivety of the exercise in order to let themselves be swept away by the same existential nostalgia felt by the main character. Yet this goal was possible, as evidenced by the moving, brave deed accomplished by the American John Cameron Mitchell, who presented his ode to all sexualities a few years ago, at the same time and under the same conditions. Shortbus and Love flaunt two devices that, at first glance, seem very similar: moist provocation, young, unknown actors, unbridled sex from the very first scene, omnipresent music, humour, semen, and a gamble on causing tears to be shed, which, for the viewers of Love, will be one less liquid for them to have to mop up at the end of the screening.

The French film centre will also lend its support to films by Rebecca Zlotowski, Gaspar Noé and Hugo P Thomas, as well as animated films by Michel Hazanavicus and Fernando Trueba and Javier Mariscal

The winner of the Microbudget Film Competition at the Polish Film Festival is a frenzied and passionate tale of growing pains, showcasing emerging talent Dawid Nickel

Climax by Gaspar Noé, on course for the Croisette

True to form, as per the filmmaker’s four previous films, Noé’s 5th full-length feature will be unveiled in Cannes, this time appearing in the Directors’ Fortnight selection

The classification of cinematic works called into question

The cinematographer is the star at Camerimage 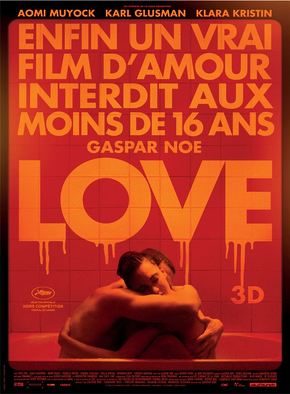