09/06/2015 - With his new film, Nos Futurs, Rémi Bezançon engages Pierre Rochefort and Pio Marmaï in a frenzied downward spiral in search of their lost adolescence

Last night the Brussels Film Festival offered the people of Brussels the chance to see Rémi Bezançon’s new film, Nos Futurs [+see also:
trailer
film profile]. Bezançon became known among the general public straight away with his first film, Love is in the Air, which pulled in no fewer than 400,000 viewers in 2005. His next film, The First Day of the Rest of Your Life [+see also:
trailer
film profile], racked up 2,000,000 admissions, received 9 César nominations and bagged two awards for its young cast (including Most Promising actress for Déborah François and Most Promising Actor for Marc-André Grondin). In 2011, he released A Happy Event [+see also:
trailer
interview: Rémi Bezançon
film profile], an adaptation of Eliette Abécassis’ bestseller, which also did well at the box office. With Nos Futurs, he gets into the cinematographic groove of bittersweet comedy. As in Love is in the Air, the main character is called Yann, a thirty-something man who seems to have done well in life, but who struggles to move forward and flourish, paralysed by his neuroses. In Love is in the Air, the hero is largely aware of his fear of flying, and of the extent to which it holds him back, whilst in Nos Futurs, Yann must go through a rite of passage in the form of a frenzied downward spiral to describe and give form to his neuroses.

Whilst celebrating his birthday with his loving wife and work colleagues, who he feels more distant from than ever, Yann realises that he has no friends. So he decides, acting on a sort of sentimental whim of failure, to track down his childhood friend, Thomas. Thomas hasn’t changed one iota. He still has the same holiday job, the same old bike, the same dirty flat, still drinks the same cheap plonk, barely making ends meet at the end of the month, and even uses the last Minitel still hooked up in France. For Thomas, there’s no doubt about it: to be able to move forward and grow old in peace, Yann and he must absolutely relive the last celebration they shared together: Yann’s 18th birthday. And for this memorable evening to play out by the book, they must get back in touch with all their old high school friends.

Along the way, they are brought face to face with the different fates of their old classmates, using an old class photo as their point of reference. Between bursts of laughter and shouting, the two friends face their extreme ways of life head on: is it better to age before one’s time or forever relive one’s youth? Is there no happy middle? At the end of their journey, one thing becomes clear: to be able to move forward and build their futures on solid foundations, Thomas, and above all Yann, must rediscover themselves and the energy they had when they were 18 to be able to let one another go.

Playing the part of Thomas, with great joviality, is Pio Marmaï, a familiar face in Bezançon’s films, who was discovered in The First Day of the Rest of Your Life, for which he was nominated for a César award for Most Promising Actor. By his side, Pierre Rochefort, who was discovered in his mother, Nicole Garcia’s film, Un beau dimanche [+see also:
trailer
film profile], takes a stroll down memory lane with elegant languor vaguely reminiscent of that of his famous father. With them, the faces of young French cinema lend energy to the film, be it Mélanie Bernier in the role of the bubbly wife, loving but out of her depth, or, labelled as actors ‘seen on TV’, Kyan Khojandi, Laurence Arné and Camille Cottin.

Like Bezançon’s previous films, Nos Futurs is produced by Mandarin Cinéma, which notably produced Saint Laurent [+see also:
film review
trailer
Q&A: Bertrand Bonello
film profile] by Bertrand Bonello, Ozon’s last films, and the OSS 117 series. The film will be distributed by Gaumont in France (with a release date of 22 July), and by Victory in Belgium (with a release date of 15 July).

more about: Our Futures

With his new film, Nos Futurs, Rémi Bezançon engages Pierre Rochefort and Pio Marmaï in a frenzied downward spiral in search of their lost adolescence

Once again, the Brussels Film Festival will shine the spotlight on the year’s little-explored cinematic treats in Brussels’ movie theatres

The first clapperboard slams for Nos futurs by Rémi Bezançon 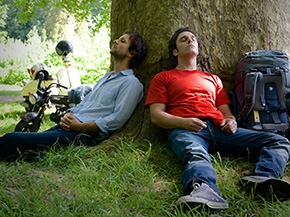