KARLOVY VARY 2015 East of the West

No Matter How Hard We Tried: A satirical portrait of contemporary Polish society

08/07/2015 - KARLOVY VARY 2015: Grzegorz Jarzyna adapts the popular theatre play No Matter How Hard We Tried into his new feature

Four years after Jarzyna's hugely successful production of Dorota Masłowska's play in one of the most progressive theater companies in Poland – TR Warszawa Theatre – the director began working on a film adaptation. Masłowska has said that No Matter How Hard We Tried doesn’t fall under the heading of what a terrible, gray country Poland is: 'This is my affirmation of being Polish and of the Polishness that, these days, is ridiculed, dirtied, and treated as a flaw, like a slap in the face from fate, at least among my generation'.

The three main characters represent three different generations of women who all have their own national traumas and issues. The very old Grandmother in a wheelchair can't seem to break out of her memories, constantly recalling 'I remember that day when the war broke out'; the middle-aged Mother chatters about cheap household goods, food and women's magazines with the Neighbour; the Daughter can't suppress her resentment towards being Polish and dreams of being a true European. In contrary to Masłowska's intentions, No Matter How Hard We Tried may seem like a humorously bitter declaration of how awful it is to be Polish, but at the same time the film persuades that if one denies his roots and tries to cut himself free from his nation, he is left drifting alone in the world.

The film is predominantly established on text, as inherent for a theatre play, but the long monologues hardly ever turn into dialogues or discussions – as a reflection of typical contemporary communication all of the characters are constantly waiting their turn to speak instead of listening to others. The text is seething with humour and irony over commercialism, consumerism, nationalism, globalization, westernisation, media, integration and stereotypes. Quite frankly it would be easier to list the topics which don't get mentioned during these 74 minutes of shrewd mockery. All of these subjects draw a sarcastic picture of contemporary Polish society which is torn between nationalism and collective (pseudo-) embarrassment.

But the overabundance of text is not the only similitude to theatre. The fourth wall set and expressive visuals may be quite demanding for the audience at first, as Jarzyna, who claims to be constantly in the search for a new language of expression and favors experimentalism, uses surrealistic virtual scenography at times similar to vivid childlike doodles. As the main focus is on the seemingly endless monologues, the background and style of the film  create a tragicomic farce which underlines the absurdity, but might not suite everyone.

It is intriguing that the film derides commercialism whereas the concept of making a fairly similar film out of a popular play seems like milking the cash cow. You can find several meta levels in this quite amusing film, but the bottom line is that even though a lot of issues addressed are relatable for other nations as well, No Matter How Hard We Tried mainly speaks to the Polish audience who is acquainted with both Jarzyna's and Masłowska's previous works.

more about: No Matter How Hard We Tried

No Matter How Hard We Tried: A satirical portrait of contemporary Polish society

KARLOVY VARY 2015: Grzegorz Jarzyna adapts the popular theatre play No Matter How Hard We Tried into his new feature

The Red Spider and 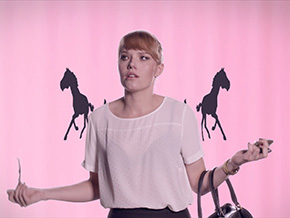