Under the Sun: Life rehearsed and staged

Acclaimed Russian filmmaker Vitaly Mansky (Pipeline, Motherland or Death) spent one year in North Korea, ostensibly in order to document the life of an average family. Of course, as previous attempts at showing life in the most totalitarian state in the world have demonstrated, it is impossible for a filmmaker, or any foreigner, to work without being constantly monitored. Mads Brügger set out to make a charade of this situation in Red Chapel – and succeeded – while Mansky has used it to lay bare the essence of the state mechanism.

In Under the Sun [+see also:
trailer
interview: Vitaly Mansky
film profile], which has just won the Best Film Award in the 19th Jihlava International Documentary Film Festival's Between the Seas competition, Mansky presents in detail how it is possible to really make a documentary on North Korea – effectively showing how indoctrination functions and propaganda is made.

The beginning of the film announces that, on the birthday of Kim Il-Sung, along with hundreds of other children, eight-year-old Zin-mi, the family's daughter, is going to join the Korean Children’s Union, an equivalent of the pioneer organisations in most communist countries until the fall of the Berlin Wall. Government watchdogs, undoubtedly assigned to the film crew as “guides”, are making sure that this ceremony goes without a hitch for the highly respected Russian filmmaker.

One of the early scenes shows a lecture in Zin-mi's class, repeated several times until a satisfactory performance is produced by both the teacher and the children. Mansky decides to leave two full repetitions of these “rehearsals” in the film, and says right from the start what audiences are to expect.

For the sake of the nation's international image, Zin-mi is put into the spotlight, and so are her parents at their workplaces – they are playing the main roles in their environments, and have to be perfect actors. Whether it is a family lunch, a meeting between Zin-mi's father, an engineer, and workers in his cloth factory, or her mother’s day in the milk factory, there are always one or two attendants on hand setting up the scene, dictating the finer details of the mise-en-scène, ushering and instructing the participants what to say, how to act or react, and what kind of facial expression to assume.

Of course, faced with such a situation, the director could not have hoped to attempt to depict the reality of life in this country utterly dedicated to the “Great Leader” Kim Il-Sung and the “Great Brilliant Commander” Kim Jong-Un, whose portraits hang on every wall. By simply keeping the actual staging of the scenes in the film, Mansky shows us that in North Korea, life itself is carefully staged and rehearsed.

Rare scenes of “reality” on the streets and on public transport show a striking contrast between the grey, everyday life and the explosion of colours and sounds in the carefully choreographed mass dances and rallies involving hundreds of smiling participants.

Just how forced these smiles are can be seen in several between-the-shots close-ups that Mansky managed to snatch, and in one powerfully moving dialogue with Zin-mi, the only moment with the protagonist caught without the attendants’ supervision. The experienced filmmaker has turned the imposed limitations into a huge advantage and simply let the fourth wall fall, exposing the sheer brutality of the North Korean state machine and the misery of living in this society. Without revealing a single detail of the functioning of the state apparatus, Mansky has conveyed its very essence.

Under the Sun is a co-production by Russia's Vertov.Real Cinema, the Czech Republic's Hypermarket Film, Germany's Saxonia Entertainment and the Korea Film Export and Import Corporation.

more about: Under The Sun

“We wanted to let the viewer see how people really behave”

Cineuropa met up with Russian filmmaker Vitaly Mansky, whose documentary Under the Sun, co-produced by North Korea, is competing at Tallinn's Black Nights Film Festival

The Docaviv International Documentary Film Festival, which ends on 28 May, has announced its winners' list

The 35th edition of North America's most important documentary film festival, Hot Docs in Toronto, has programmed a total of 13 German films and co-productions 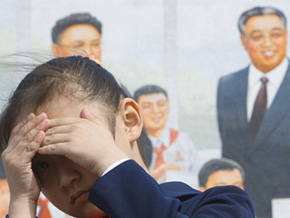