Fathers, sons and business. Seven years on from Non pensarci, [+see also:
trailer
film profile] Gianni Zanasi returns to tales of business, family, incompetent heirs and jobs on the line. La felicità è un sistema complesso [+see also:
trailer
interview: Gianni Zanasi
interview: Valerio Mastandrea
film profile], the new film by the director from Modena that was unveiled at the 33rd Turin Film Festival, does this but from a different perspective. This time, Valerio Mastandrea observes these situations from the outside. His character, Enrico Giusti, works for a big law firm, his job consists in approaching incompetent executives and convincing them to leave their companies before they cause them to collapse. Most of the time these executive are heirs. Alberto Nardini, the first-born son who ruins the family business played by Battiston in Non pensarci could well be a ‘client’ of his. Here, though, Giuseppe Battiston plays the confused son of Enrico’s boss (Teco Celio): another heir trying to deal with his overbearing father.

Enrico is very capable at persuading people, and is willing to do anything to get the job done: if the executive he’s trying to remove from the company is a hardened party-goer, he will stay there dancing with him for hours on end. When all is said and done, these “daddies’ boys” can’t wait to sign the papers and create a new life for themselves on the other side of the world. Everything changes, however, when a car ends up in a river and a woman appears in Enrico’s apartment. One accident claims the lives of an important couple of entrepreneurs, leaving behind orphans Filippo and Camilla, 18 and 13 years old (played by first-time actors Filippo De Carli and Camilla Martini). Enrico is assigned to this delicate case: stopping two teenagers from taking over a big industrial group. In the meantime, Achrinoam (played by multi-award-winning Israeli actress Hadas Yaron), the dumped girlfriend of Enrico’s brother Nicola, has nowhere to go but Enrico’s place. This strange woman, who sleeps on the floor of his lounge, forces him to take a good hard look at himself, an unsettled 40-year-old man who wages war on the new economy to avoid facing his own problems. The two teenagers, meanwhile, determined not to do “what our parents would have done”, have no intention of giving up the business and cutting back on jobs, leading Enrico to switch sides for the first time in his life.

“I delved deeper into subjects that I’ve cared deeply about since making my first film: the need for change, but also the ambiguity of this, as it doesn’t just depend on us”, explained the director in Turin. Compared to his previous films, Zanasi’s latest piece has a more structured storyline and pays greater attention to aesthetics, whilst maintaining the irony and spontaneity of the characters and dialogue. The use of music can seem a little invasive at times (it doesn’t strengthen the images but steals focus, creating a video clip effect at time that interrupts the narration), but is an intentional vehicle of emotions. “I work on instinct”, explained the director, “I believe in excess, not in taking things away”. We are made to see, in his scattered anarchical way of thinking, that this is the exact film he wanted to make. This is also why Zanasi’s films are always worth seeing.

La felicità è un sistema complesso was produced by Rita Rognoni for Pupkin Production and Beppe Caschetto for IBC Movie with Rai Cinema, with financial support from the Italian Ministry for Cultural Heritage and Activities and Tourism and Trentino FC; BiM will release the film in Italian theatres on 26 November, whilst international sales are being handled by Rai Com.

Europa Distribution explains why together is better at Rome's MIA

The network held its 13th Annual Conference during Rome's market, gathering around sixty of its members to discuss the latest evolutions in the European distribution market

CANNES 2018: The comedy by Gianni Zanasi has been crowned as the best European film in the Directors’ Fortnight; Gaspar Noé and Pierre Salvadori also awarded

In the words of General Delegate Edouard Waintrop, the new film by the director of La felicità è un sistema complesso is “a truly deranged comedy”

European docs dominate the programme of the Krakow Film Festival 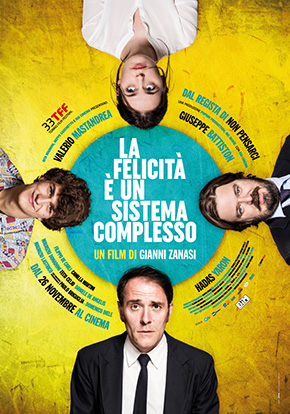 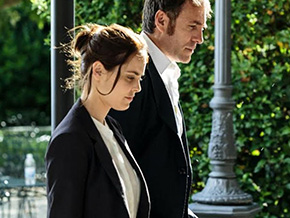