Not only was Cristobal Arteaga a member of the jury for the Gijón International Film Festival last year (read the interview), but he also unveiled his first full-length feature film at the event, Faro sin isla [+see also:
film review
trailer
interview: Cristóbal Arteaga
film profile], which had yet to be released even though his second film, The Sad Smell of Flesh [+see also:
trailer
film profile], was already out. The Chilean director, who currently resides in Spain, takes on subjects such as loneliness, faith and religious torment in his films, using the lush countryside of his adoptive land, Galicia, and enabling it to play transcendent roles or even that of a "landscape character".

In Ave y Nada [+see also:
trailer
film profile], currently part of the Llendes alternative section of the line-up at Gijón, Arteaga once again pits his two characters against their environment. We see Adam (Manu Polo), who, as the first human, has no point of reference – he doesn't even know how to walk, much less survive. He must invent everything for himself, even fear. Being a pioneer is to know how to take risks, to be bold, to overcome, to fail... Naked, Adam wanders through a forest and gives expression to all of his instincts.

After a restless night, Adam wakes to discover another naked creature: Eve (Antía Costas). After an initial moment of fear, they come to know each other (with the sense of smell playing an important role here, just like in the animal world), to live together, to love each other... to hate each other. As they evolve (so to speak), our Adam and Eve develop a symbolic language, based on paintings and drawings, leading to the creation of primitive idols. Their journey is broken up into several seasons by Arteaga. He uses interludes where the screen is left black and punctuated by different, evolving styles of music. Starting with tribal chanting, slowly the music evolves into electro after passing through medieval-like tunes.

Devoid of dialogue as it is, Ave y Nada makes us take on a more physical role in our heroes' journey, which the actors interpret mainly through the improvisation of a basic script (one of Arteaga's current directing methods). This technique allows us to see one of the most fundamental stories of our shared history take shape in front of the camera, even if the ending distances itself from the Biblical version. The contact with nature, an essential factor in this movie, is created by using a camera that films from a certain distance and that avoids using shot/countershot, thanks to the film’s lack of dialogue. In the dream sequences, the director projects frightening figures, moving strangely, onto the sleeping characters' bodies, accompanied by enigmatic music.

Thus the film offers a physical experience based on a metaphysical theme. After a sequence filmed on the famous Beach of the Cathedrals, Ave y Nada finishes with a tracking shot over a desolate forest, serving as a counterpoint to the forest at the beginning of the film: one which was both exuberant and paradisaical.

The film was produced by Deica Audiovisual. 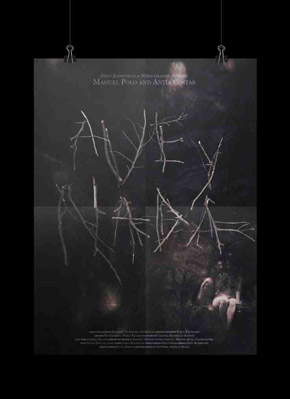