Cake-Baly Marcelo in The Citizen

"Tell us something about Hungarian art during the Renaissance." Sat opposite his examiners as they grill him on the history of Hungary, the country he wishes to become a national of, Wilson Ugabe, who fled the war in Guinea-Bissau following the death of his wife and the disappearance of his two daughters, is feeling pretty small. In the absence of any knowledge of Matthias Corvinus, commonly known as “The Just”, all he can offer are the words to the Hungarian national anthem as a goodwill gesture: “There is no place for you in that vast world out there.” And he even has to go so far as to describe horrific events (pregnant women disembowelled by soldiers placing bets on whether the babies were boys or girls) to put an end to the lecturing by the chair of the jury as he criticises those who abandon their native soil. But, regardless, this rather difficult interview turns out to be pointless ("I’ve seen no improvement from you in the last six months, Wilson"), and he must go back to the drawing board. This is the opening scene of The Citizen [+see also:
trailer
film profile] (Az állampolgár), the third feature by Roland Vranik, following Black Brush (which won Best Film at the 2005 Hungarian Film Week) and Transmission (which won awards at such festivals as Seville in 2009), a film that was unveiled as a world premiere at the recent Stockholm Film Festival, and which will be distributed in Hungary from 16 January next year, courtesy of Mozinet.

As its follows Wilson’s (played by Dr Cake-Baly Marcelo) journey towards citizenship, the movie endeavours to paint a humanistic portrait, as the main character is a “model” refugee – a fifty-something who is well liked in his job as a supermarket security guard, has forged successful friendships with a number of residents in his neighbourhood, and is paying for private lessons to acquire the cultural knowledge necessary to pass the exam that will open the door to the naturalisation process. He is also a good-hearted man who empathises with those who have been through the same uprooting experience as him, such as Iranian woman Shirin (Arghavan Shekari), an illegal immigrant who escaped from a detention centre to avoid being deported, and who Wilson helps to give birth in secret, offering her and her baby shelter in his house. But a real love story with Maria (Mahr Agi), a woman in her fifties who is married with children, and who teaches him the basics of the Constitution and takes him on trips to visit the city’s monuments and museums, opens up future prospects for Wilson and complicates matters somewhat...

A confident film that takes care not to give in to the temptation to draw a caricature, despite the staunchly optimistic nature of its central interracial “love story”, The Citizen offers a fairly even-handed portrayal of the perception of immigrants in Hungarian society, and the rampant racism ("You like free food, negro") seeping to the surface rather discreetly, in contrast with all the "false good intentions" (such as those exhibited by Maria’s sister, who is a fan of Wilson, but who nevertheless explains: "Be careful – they’re not like us!"). Above all, the film gives an accurate representation of that intermediate state full of hope and frustration, where you are told that "the naturalisation process can last up to ten years, especially for an African", a potential new life where you must forget the violent episodes of the past in order to always show an affable face in countries where, often, as one of Wilson’s friends who went to live in Austria points out, "Women don’t even look at me – not even one smile. No one speaks to you." And while appreciating both Bartok and Fela Kuti may be the first step towards mutual understanding, the path to harmony is fraught with pitfalls.

Produced by Károly Fehér for Popfilm, The Citizen is sold abroad by the Hungarian National Film Fund.

more about: The Citizen

Balázs Bodolai and Gabriella Hámori topline the feature debut by Nándor Lőrincz and Bálint Nagy, a production being staged by M&M Film and PartnersFilm

On Body and Soul emerges victorious at the Hungarian Film Awards

The tenth-anniversary edition of CinÉast kicks off in Luxembourg City

Hungarian film prepares for the future at the Cannes Film Market

A slew of Hungarian features currently in post-production are about to hit the Croisette, and the new projects by Kornél Mundruczo and Janos Szasz are also on the menu

Popfilm pins its hopes on The Citizen and The Wednesday Child 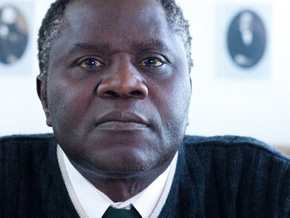