A Quiet Heart: A religious battle on a micro-level

29/11/2016 - In his third feature, Israeli director Eitan Anner tackles the constant religious tension in Jerusalem, but on a micro-level of one character in new surroundings

Ania Bukstein and Giorgio Lupano in A Quiet Heart

In his third feature film, A Quiet Heart [+see also:
trailer
film profile], which has just won the Grand Prix for Best Film in the Main Competition at the Tallinn Black Nights Film Festival, Israeli director Eitan Anner tackles the constant religious tension in Jerusalem, but on the micro-level of one character in new surroundings.

Naomi (Ania Bukstein, who also won the Best Actress Award at Black Nights), a young professional pianist from Tel Aviv, wants to start a new life in Jerusalem. We learn in the first half of the film that she is dealing with an unspecified personal crisis. She no longer wants to go after her dream of being a world-class pianist, an occupation that seems to have been planned for her by her strict and overprotective parents for most of her life. Breaking free from these constraints and finding her own path and place in life, she moves to Jerusalem, into an apartment in an ultra-Orthodox neighbourhood, where she is pressured to comply with the rigid lifestyle. Uninterested in religious matters, Naomi slowly finds out what happened to the former tenant, and the atmosphere becomes more intense as she has to decide whether to run away again or stand up for herself.

A Quiet Heart starts building suspense, although the impression one gets is “too little, too late”, as one is left wondering for too long what secret lies behind Naomi's relocation to Jerusalem. By the time a little light is shed on her pianist background and her break-up with a long-term boyfriend, one has almost lost interest in finding out about these explanations, which are not elaborate enough. Instead, the director introduces a Catholic church in the neighbourhood, and the sound of its pipe organ, which attracts Naomi, as a narrative device to catalyse her confrontation with the ultra-Orthodox inhabitants. She meets the organ player, the handsome Brother Fabrizio (Giorgio Lupano), who starts teaching her to play the instrument (which is close enough to piano to interest her, but far enough not to remind her of painful memories), which leads to an awkwardly flirtatious bond developing between them.

Overall, the slow pace works against the film, but it does convincingly outline the divided nature of the city and its religious groupings by creating contrasting atmospheres in its imagery. Whereas Naomi's housing block exudes a chilling, almost hostile mood, tinted in a cold blue light, the interior of the church is immersed in a warm and welcoming orange hue. We know that Naomi has found her place and her home once her apartment is flooded with an equally comforting light near the end of the film.

With A Quiet Heart, writer-director Anner has crafted a piece that is very symbolic of the subject of the coexistence of different religions, a topic inherently important to Israel, and especially Jerusalem. The answer the film has to offer is that it takes courage from a brave individual to stand up against intolerance. The movie unfortunately misses its chance to make a greater impact due to its leaving the character of Naomi underdeveloped, and not providing the subject matter with a more poignant context.

more about: A Quiet Heart

A Quiet Heart: A religious battle on a micro-level

In his third feature, Israeli director Eitan Anner tackles the constant religious tension in Jerusalem, but on a micro-level of one character in new surroundings 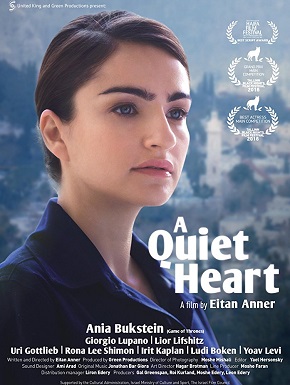