Home Is Here: The bonding of two lost souls

30/11/2016 - Austrian director Tereza Kotyk's film, a story of two characters who never meet in person but form a strange bond, had its international premiere at the Black Nights Film Festival

Stipe Erceg in Home Is Here

Twenty-something Hannah (Anna Aström) has returned to her hometown of Innsbruck to live with her mother and little brother, whom she takes to school every day. We never find out what – if anything specific – has happened to her, but she is clearly trying to come to terms with her past, writing poetic lines on post-it notes. Max (Stipe Erceg), on the other hand, is a taciturn business executive, living in a strangely impersonal, modernist villa. He goes to work every day, and for a run or a bike ride with a friend in the nature surrounding Innsbruck.

One day, while Max is at work, Hannah enters his house, hesitantly at first, and then starts coming back every day and leaving signs of her presence. She turns up the heating, eats his expensive pralines, turns glasses upside-down and looks at his private photo box of stored-away memories of his former lover, a famous photographer. Max seems intrigued by this intruder into the calculated order of his glass-and-steel home, who eventually leaves him a note saying, “(I) have no fear.”

It is an unusual bond that these two loners form through Hannah’s messages. Although Aström is Swedish, Hannah is clearly an alter ego of the director, and not just because of her Czech heritage. The visual style of the film follows the poetic sensibility of its protagonist. The camera often lingers on the textures of the home, the images by DoP Astrid Heubrandtner evoking the synthetic feel of the surfaces, and showing Hannah smelling and feeling her surroundings as much as seeing it. A strong support for conveying the characters’ sensitivities comes from the accentuated, melodic piano music by Oscar-winning Czech composer Markéta Irglová.

The universal and complex theme of home is taken quite literally, and fortunately not expanded on in the dialogue in any unnecessary philosophical terms. Throughout the film, the characters seem to be on an emotional search for the feeling of homecoming, and in the end, they might even find it. The characters’ movements are repeated over and over, establishing the daily routines and the slow progression of their relation.

With just the bare bones of a plot, Kotyk manages to uphold a thin layer of suspense, although the unresolved backstory mysteries of the two characters may leave the viewer frustrated. The beautiful serendipity of the (non-)encounter contains a similar kind of playful melancholy to that of Charlotte and Bob in Lost in Translation. And even though the curious premise of the story could have led to a much bigger film, as a first feature, it shows quite a distinctive hallmark. It stays with you and makes you wish for a happy future for these two characters – and the director’s next film.

Home Is Here was produced by Austria's Kranzelbinder Gabriele Production.

more about: Home Is Here

“Home is something we find inside ourselves”

Austrian director Tereza Kotyk talks to us about her debut feature film, Home is Here, in competition at the Lecce European Film Festival, a minimalist and poetic dialogue across a distance

A glimpse into Czech audiovisual production at Finále Plzeň

The gathering is readying its annual showcase of domestic production, both past and future

Life Guidance: A man breaks free from the clutches of idyllic capitalism

VENICE 2017: Austrian Ruth Mader's film is a sterile and disturbing futuristic thriller in which a private agency is tasked with rewiring those who rebel against the system

Home Is Here: The bonding of two lost souls

Austrian director Tereza Kotyk's film, a story of two characters who never meet in person but form a strange bond, had its international premiere at the Black Nights Film Festival 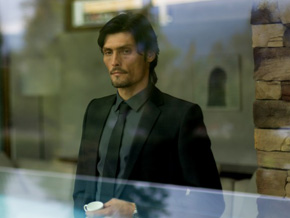