Simon or Casper: Which one is The Man?

Søren Malling in The Man

After an opening sequence that effectively sets up the successful career of artist Simon Brahe (Malling), the film quickly moves on to depict his daily routine, which includes running a hip artistic centre with the help of his life-long companion, Darling (Ane Dahl Torp). Simon is undoubtedly “the man”, the one everyone has been talking about for decades – at least since he dumped his first wife, a prima ballerina, to fully devote himself to painting. But he left behind not only his wife, but also their son, whom he has never met – until now… When Casper (Oftebro) shows up, he takes everyone by storm. It turns out the 28-year-old artist is the world-famous graffitist known as "The Ghost" – something that seems to threaten his father’s established status.

With a classic narrative arc that brings an external element into a stable circle, violently shaking it up as if caught in an earthquake, The Man pits a father against his son, without any emotional bond between them. It places them in unexpected contexts and features a series of dialogues that switch from drama to comical situations, deliberately avoiding melodramatic scenes or clichéd conceptions linked to fatherhood.

Rather than feelings, Sieling’s script seems to focus more on success, artistic jealousy and potential frustration. With dynamic editing that strings together rapid sequences set within luxurious environments, The Man is anything but a monotonous film, although its pace could sometimes have been slower, allowing the viewer to pay greater attention to the details and leaving more room for character development.

Sieling’s second feature – eight years after Above the Street, Below the Water – was co-produced by Copenhagen-based company Nimbus Film along with Hummel & Nimbus (Norway) and Sirena Film (Czech Republic).

As part of the Festival Scope IFFR catalogue, The Man is being screened online until 5 February here.

more about: The Man

We met up with Danish director Charlotte Sieling, whose latest film The Man is released in cinemas in Norway

The leading Scandinavian market is ready for its 22nd edition, and will welcome the new projects by Erik Poppe, Bille August and Christian Tafdrup, among others

With Film of the Year and eight more Roberts, Hlynur Pálmason’s debut has triumphed at the Danish Film Academy’s ceremony, while Ride Upon the Storm swept all the major TV series categories

The Return: Going back to unknown origins

Oslo Pix - the return of an international film fest to Oslo

Norwegian director Ole Giæver's Berlinale entry, From the Balcony, will open the new showcase, which will screen 70 films from 8-13 June

Simon or Casper: Which one is The Man?

At 40, Göteborg wants to become the festival of the whole Nordic region

The largest showcase in the Nordic countries, which takes place from 27 January-6 February, will this year screen 450 films from 84 countries 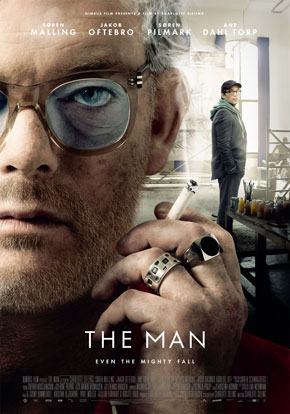