From the infinitesimal to the immense, as seen From the Balcony

20/02/2017 - BERLIN 2017: Through an intimate diary that reveals his most secret thoughts, Ole Giæver, one tiny speck in a vast universe, takes us on a journey through life and what it means to be human

Ole Giæver in From the Balcony

Wandering and solitary dreaming played a big part in both of his previous films, but in From the Balcony [+see also:
trailer
interview: Ole Giæver
film profile], included in the Panorama section at this year’s Berlinale, Norwegian filmmaker and young father Ole Giæver offers us a soliloquy on the course of life and his most intimate reflections on the nature of existence. Part of the generation who grew up with both books and the internet, Oslo-based Giæver here presents himself as one minuscule dot in the expanse of time and space that is the universe. Accompanying him on this journey — through a collage of photographs, old home videos, purposely-filmed footage and even some short snippets of animation, adding a splash of freshness and fun — we see youth, adolescence, family life; everything that goes to make up a human life. In this case, it’s the life of one particular individual who tells us that he has always felt dislocated from the rest of the world, and through his eyes we find that we, like Giæver, are also “halfway through our lives.” His individuality, both wondrous and absurd in the face of the universe’s immensity, reminds us of our own, and that of everyone who has come before us or who will follow after. Haven’t you noticed that every human being has a distinctive way of laughing, unlike everyone else’s?

If the director’s take on the human condition manages to strike a profound chord with his audience, it’s because he is not afraid to bare all, exposing his inner life in such a candid and generous way that he becomes universally relatable. Like a modern-day Montaigne, Giæver rummages into the deepest corners of his inner world, unearthing his most intimate truths to share with us: a mishmash of confessions and reflections whose existential and emotional veracity we, as fellow human beings, can instantly recognise. There are moments when this truthfulness, whether captured in a tiny detail from everyday life or in the big unanswerable questions that have consumed our species since we emerged from the caves, almost makes our hair stand on end.

The director and narrator describes the funeral of a much-loved friend, which suddenly morphed into an opportunity to attract the attention of a girl with whom he used to go school by putting on his very saddest expression — for no other reason than the fact that she happened to be standing nearby. He recalls thinking, back when he was a schoolboy, that one day he would really be somebody. He evokes the sense of inexorable repetition that pervades our daily lives and only becomes more entrenched with the passing of time; muses that, like himself, everyone has a secret desire to be loved; and remarks on the realisation that his children are now individuals in their own right, with an inner life that he will never be able to share. He acknowledges that, sometimes, he is just waiting for his life to pass. He talks of how his parents became sentimental when shown his childhood report card with his teacher’s warm praise, emphasising that their tearfulness was not due to the gratifying comments or the fact that they were now presented with the school reports of their grandchildren, but was instead about “being seen”.

Filming with a shoulder-mounted camera, Giæver seems to see right through each and every one of us, with our modest or momentous lives, each fleeting and beautiful like the slow-motion image of his children playing on a trampoline, or that of the setting sun, red like a flame, slowly sinking behind the balcony wall.

From the Balcony was produced by Mer Film.

more about: From The Balcony

"I try to understand, as an explorer, what it means to be human"

BERLIN 2017: Cineuropa caught up with Norwegian director Ole Giæver, who is presenting his latest feature film, From the Balcony, in the Panorama section of the Berlin Film Festival

With a selection of 36 projects, including those by Adina Pintilie, Milko Lazarov, Radu Jude, Ole Giæver and Simon Jaquemet, among others, the Berlinale’s co-pro market is raring to go

The Berlinale Co-Production Market event is inviting the latest TV projects by Mika Kaurismäki, Pernille Fischer Christensen and Agnieszka Holland, among others, to seek out partners

The ZFF's industry sidebar presented a wide variety of events, master classes and panels, including a pitching forum for student films from the region

The Riga IFF has announced the winners of its fourth edition, with three trophies going to Rainer Sarnet’s movie, including the festival’s main award

Oslo Pix - the return of an international film fest to Oslo

Norwegian director Ole Giæver's Berlinale entry, From the Balcony, will open the new showcase, which will screen 70 films from 8-13 June

From the infinitesimal to the immense, as seen From the Balcony

BERLIN 2017: Through an intimate diary that reveals his most secret thoughts, Ole Giæver, one tiny speck in a vast universe, takes us on a journey through life and what it means to be human 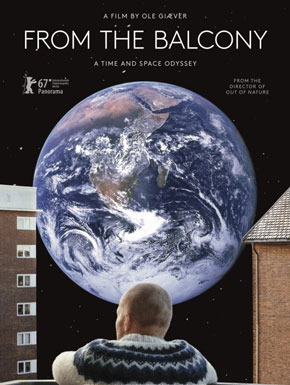 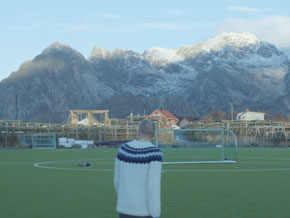 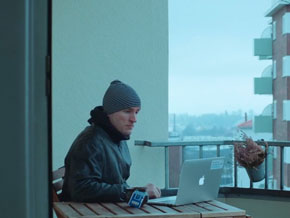