07/04/2017 - Russia's Vitaly Mansky turned to his own personal roots for his new movie, which was presented in the Baltic Gaze section of the Vilnius Film Festival

Russian documentarian Vitaly Mansky, who exposed the workings of North Korea’s propaganda machine in his previous title, Under the Sun [+see also:
film review
trailer
interview: Vitaly Mansky
film profile], turned to his own personal roots for Close Relations [+see also:
trailer
film profile], presented at the Vilnius Film Festival, in the Baltic Gaze section. He interviewed members of his own extended family in Ukraine in their kitchens and living rooms for a film that brings an intimately human and domestic dimension to the nation’s political crisis, and reveals how the views of citizens are shaped by the lies of the media and community myth-making.

While there have been many recent documentaries on Ukraine in the wake of Russia’s annexation of Crimea, most have been rousing, pro-Euromaidan visions of resistance focused on Kiev as the heart of revolution. Shot over one year starting in May 2014, Mansky’s film stands apart in its geographical spread, capturing the mood of the country as manifested in the attitudes of ordinary citizens from Kiev and Lviv (historically a heartland of anti-Soviet sentiment, and home to his elderly mother) through to Odessa, Sebastopol and finally separatist stronghold Donetsk, where tanks roll through the streets and the air sparks with tension. In doing so, it offers a refreshingly nuanced portrayal that attempts to understand the roots of nationalism and identity frictions, rather than further entrenching battle-line divisions.

In a Donbass mining settlement, Misha, the family’s oldest relative, compares Ukrainian soldiers to 1940s nationalists whom he claims made a local woman’s hair turn grey in an instant by cutting up her husband in front of her. It’s an evocative image, illustrative of the way facts blend with legend to create an evil other in the popular imagination. A television in the background announces a Ukrainian “offensive” beginning. In many such scenes, the oral tales passed around communities combine with media broadcasts to weave biased ideological stories.

While the film is one of contrasts and balance, Mansky’s own opposition to Russian strong-arm actions is evident in his inclusion of footage of the assassination site of opposition leader Boris Nemtsov, whose killing so close to the Kremlin demonstrated a brash new nakedness in the exercise of power. In its insistence on an irreducible complexity of perspectives and open dialogue, Close Relations is a bracing antidote to reductive lies and the cheapening of life.

Unspooling from 16-22 March, the festival will introduce rising talents from the Visegrad region in its short-film competition In the Heart of Europe

Quit Staring at My Plate triumphs at Crossing Europe 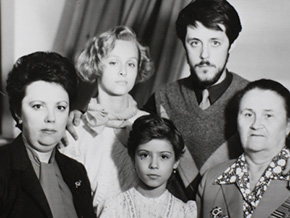