Lust for Sight: Cinema as a sixth sense

26/04/2017 - The second feature by Manuel von Stürler, in competition at Visions du Réel, allows us to see the world through different eyes, far from a hypothetical and ironic “normality”

After the success of his first feature, Winter Nomads [+see also:
film review
trailer
interview: Manuel von Stürler
film profile] (which had its world premiere at the Berlinale and was named Best Documentary of 2012 by the European Film Academy), Swiss director Manuel von Stürler returns to the documentary genre with Lust for Sight [+see also:
trailer
film profile], which is having its world premiere (in the feature film competition) at Visions du Réel.

Lust for Sight is a sensitive voyage through unknown territories that comes to life thanks to the power of cinema. What is reality? How can we be sure that what we perceive with our senses, especially through the miracle of sight, corresponds to reality in its entirety? This question and others are raised by von Stürler, who becomes an indispensable guide to a world made up exclusively of sensations, instinct and disorientation. Lust for Sight encourages us to reflect on the concept of “normality” in a world that is ever more confusing and complex. Reality is revealed through the director's (“imperfect”) gaze, in all of its multiplicity and mysterious diversity.

Confronted with the risk of blindness ever since he was a child, von Stürler lives with the full expectation that this frightening sentence will one day be carried out. Thanks to his “passion to see” (the literal translation of the film's French title), this fear appears to have been exorcised, faced head-on in spite of the difficulty of putting a face (in this case images) to the anxiety that torments him. How can you define darkness or nothingness when blindness suddenly deprives you of light and colour? Do the visually impaired really live, as many people think, in darkness, a concept almost impossible to describe, or is it just an absence, compensated for in an almost magical way by the other senses? The testimonies of various experts, either medical staff or simply people who must live with blindness, help us to reflect on this question, opening the door to a fascinating and incredibly mysterious world. Von Stürler confronts us with his own personal experience while at the same time giving us a universal reflection on diversity. His is an introspective journey that travels from the past (his childhood) to the present (the anxiety linked to his illness), accompanied by a series of touching, brilliant and lively characters who have an almost unreal optimism. His personal journey is intertwined with those of his characters in a calibrated switchover (constructed through careful editing) between introspection and openness toward the world.

The director's voice guides us, making us see what we cannot, and will not, see through images. The use of the subjective camera allows him to be present in the film without physically dominating it, much like a ghost whose presence is noticeable but whose appearance we can't actually see. This aesthetic choice in some extreme respects takes attention away from the personal story without pushing it into the background. Von Stürler's gaze is translated through the medium of film, which becomes a character in itself, a necessary guide and support. The characters seem hypnotised by the gaze of the director, who observes them through the “mechanical eye” (of the camera/movie camera), as a sort of bionic substitute for his own vision. What if what we see is, in reality, nothing but pure subjectivity? Is it possible to share “our” world with others, or are we condemned to live in a state of imperceptible solitude? It is up to the audience to find out the answers to these questions.

(Translated from Italian by Margaret Finnell)

more about: Lust For Sight

During Pitching du Réel at the Nyon DOC Outlook International Market, Cineuropa met with director Eva Zornio and producer David Fonjallaz to talk about their project My Father, Tinder, and I

Lust for Sight: Cinema as a sixth sense

The second feature by Manuel von Stürler, in competition at Visions du Réel, allows us to see the world through different eyes, far from a hypothetical and ironic “normality” 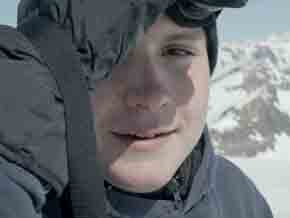 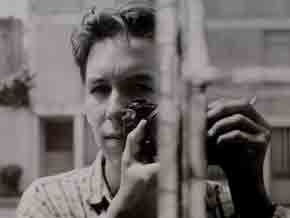