The 15th Cyprus Film Days International Festival opened in Limassol by hosting the world premiere of Adonis Florides’ Rosemarie [+see also:
trailer
film profile], which is taking part in the Glocal Images international competition selection (see the news). Rosemarie is the sophomore feature by the Cypriot director, who also lives and works in Limassol, and comes 14 years after his feature debut, Kalabush (2003), which he co-directed with Theodoros Nikolaidis.

Costas (Yiannis Kokkinos) used to be a talented writer of literature; he now earns a living working as the main scriptwriter for a successful soap opera, the titular Rosemarie. After he relocates to a new apartment, Costas suffers from a major writer’s block and sees the ratings for his cheesy show, which he secretly loathes, take a nosedive. To come up with some fresh ideas, he decides to observe his new neighbours – and especially the dysfunctional family that lives next door. Focusing on their issues and their young daughter Chryso (Niovi Charalambous), he will find the inspiration he was lacking by using their dramatic everyday stories as elements of his TV characters. But things soon become more perplexing as Costas inches closer to the family and gets more involved in their problems. As a result, he will be forced to find a way to balance out his life through them while exploring his own personal demons.

Like his main hero, Florides is trying to find a balance between different worlds and genres. Rosemarie is a drama film that also bears elements of comedy and even verges on thriller territory thanks to its hero’s voyeuristic tendencies. Set in Limassol and its scenic outskirts, the movie is essentially a recreation of a slightly sophisticated soap opera that simultaneously mocks its glossy characters and tries to provide an escape from real life. Rosemarie is perched on the very limit of veracity, spying on tragic events while romanticising them through an uncanny, light-hearted, soap-like absurdity. This war between two worlds will inevitably lead the viewer to also question where the fictional depiction overpowers reality, although it should be noted that this fine line between the two doesn’t work all the time and, in conjunction with some story fillers, decreases the breathability of the film’s narrative.

According to Florides, who also wrote the script, this project started almost ten years ago, as he went through multiple drafts before arriving at his final version. The main virtue of Rosemarie’s story is that it aims to present a multi-layered analysis by tackling the closed and sometimes secluded patriarchal Cypriot society, which is accustomed to hiding family secrets. Furthermore, the director challenges his compatriots by touching on subjects that could never be depicted in a rather conservative and guilt-ridden typical Cypriot soap opera, such as questioning sexual orientation, “immoral” relationships and violence.

Rosemarie is a provocative film that challenges the Cypriot social status quo, and Florides probes its limits by remaining faithful to one of his characters’ citations: that everything should be filled with the right amount of soap to sanitise things, idealise them, wrap them up in glitzy paper and sell them to a masquerading society that tries to entomb its sins.

Rosemarie is a Cypriot production by Marios Piperidis (ΑΜP Filmworks Ltd) in co-production with Andros Achilleos (Seahorse Film), and was supported by the Ministry of Education and Culture of Cyprus.

We chatted to Elena Christodoulidou, senior cultural officer at the Ministry of Education and Culture of Cyprus, about the present and future of Cypriot cinema

Jens Assur’s feature has come out on top, while Vahid Jalilvand and Hlynur Pálmason left with two of the main awards from the 58th Thessaloniki International Film Festival

“We are trying to spread our wings even more”

Cineuropa chatted to Tonia Mishiali, one of the artistic directors of the Cyprus Film Days, about the present and the future of this local gathering that aims high in the festival community

Thessaloniki lifts the lid on its full line-up

The 58th edition of the Greek gathering includes a thematic international competition, a Greek focus and the launch of its first VR competition 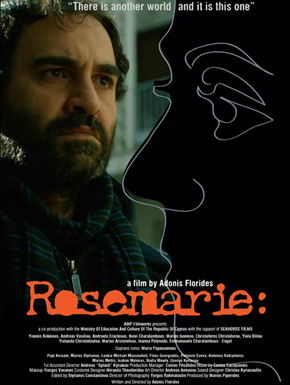