Review: Meda or the Not So Bright Side of Things

The title of Romanian filmmaker Emanuel Pârvu's first feature, Meda or the Not So Bright Side of Things [+see also:
trailer
interview: Emanuel Pârvu
film profile], is an ironic understatement. It is the gloomy story of a good man who finds himself in bad circumstances, set in a tough rural environment in a country where the customs of a communist past collide with the shaky EU present day. The film world-premiered as part of the Feature Competition at Sarajevo Film Festival.

The film is set in a village on the edge of a forest in rural Romania, where middle-aged Doru (Şerban Pavlu, from Aferim! [+see also:
film review
trailer
interview: Radu Jude
film profile]) learns that his wife has died. At home his adopted teenage daughter Meda is waiting for him (Ana Radu) and the day after he returns he is visited by the local police who tell him that the tax authorities have sent a notice regarding a payment that has been outstanding for three years, plus interest. As Meda's legal guardian was Doru's wife, Doru cannot take custody of his daughter until he proves that he can provide her with both food and shelter, leading him to desperately look for ways to make money.

However, there are not many legal ways to earn money in this godforsaken place. You can cut wood or sell cattle but Doru's cows are too young, and he has been on the timber crew too many times already this year. There is also poaching, and Doru does sometimes set unlicensed traps for rabbits, but he draws the line when he is offered the opportunity to join a crew assisting a politician in a bear hunt, which is where the real money lies.

This is where Pârvu positions his protagonist: between a corrupt society and his own morals. The film is split into two narrative parts that sometimes overlap but constantly affect each other. One on the hand we have Doru, a kind man who is doing his best to keep his house and his adopted daughter. On the other, we have a community where work is scarce and everybody must fight for their piece of bread.

The society in which Doru lives in is in conflict with the mentality inherited from the Balkan temperament, its communist past, and the standards enforced by the government, in turn coming from the EU. Pandele (Florin Zamfirescu) who makes the decisions regarding who gets to join the timber-cutting crew has no problem accepting bribes, but when a controller from the capital comes to visit, he imposes a strict quota on the number of trees that can be cut down. The chief of police (Ion Sapdaru) is full of understanding for Doru, but he agrees that beating up a child is "education" and not abuse, when a local teacher accuses a violent drunk of this crime.

Pârvu directs his debut film with complete control, carefully constructing his scenes with actors. Pavlu does not only relate to the burden on the shoulders of his character, but also depicts the flesh-and-blood of the person beneath. DoP Silviu Stavilă captures the remote area in both its muddy and dilapidated everyday setting, but also its unexpectedly beautiful dream-like haze.

Meda or the Not So Bright Side of Things was produced by the Romanian company FAMart Productions.

more about: Meda or the Not So Bright Side of Things

“There are many shades of the Romanian grey”

We talked to Emanuel Pârvu, who explores the challenges in rural Romania with his first feature, Meda or the Not So Bright Side of Things

The Vienna-based festival (13-22 April) will screen a selection of 162 films; Márta Mészáros will receive a Lifetime Achievement Award at the opening gala, Kira Muratova at the closing gala

Ana Urushadze’s debut feature triumphs at the 23rd edition of festival, where it also received the Cineuropa Prize

Review: Meda or the Not So Bright Side of Things

The selection includes seven films, three of which will world-premiere at the gathering 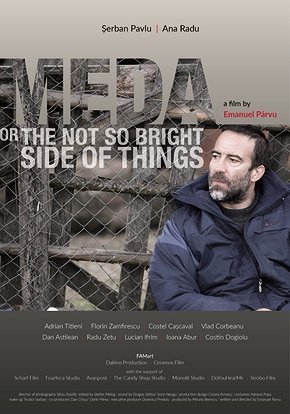