04/09/2017 - VENICE 2017: Through an allegorical, dystopian story, debutant Emre Yeksan raises awareness of a possible catastrophic event, while making a clear social comment on his homeland

Turkish director Emre Yeksan dedicated almost four years of his life to bringing the idea behind his debut feature film, The Gulf [+see also:
trailer
interview: Emre Yeksan
film profile], to fruition. Before that, he worked as a producer in Paris, and after his return to Istanbul, he directed a short film entitled Aziz (2014) as well as forming part of the directing team behind the short documentary Welcome Lenin! (2016). The Gulf has been presented at multiple acclaimed development workshops and co-production markets, and is now taking part in the competition of the 32nd International Film Critics’ Week at the 74th Venice Film Festival.

Selim (Ulaş Tuna Astepe), an apathetic 32-year-old man, leaves Istanbul after a disastrous divorce and an unsuccessful business career, and returns to his parents’ house in Izmir. There, he will have to face his past, his family members, his ex-girlfriend, his schoolmates and people who seem to know him, such as Cihan (Ahmet Melih Yılmaz), who claims that they were friends during their military service. Everyone notices his reluctance to do anything new, and he is also uninterested in thinking about the future. After a huge fire close to Izmir’s port, the city is enveloped by a horrible smell that forces everyone to abandon it. Selim is probably the only one unaffected by it – on the contrary, he now feels ready for something new.

The Gulf is a journey back to one’s roots. The story, written with local writer Ahmet Büke, is partially based on Yeksan’s personal experience of returning to Izmir, also his hometown, when he had to undertake a similar personal journey of self-discovery. The smell was a real-life problem in the Gulf of Izmir several years ago, but the film goes beyond this local dimension. It is always emphasised that this story is happening in Turkey, but actually this almost dystopian tale could be unfolding anywhere. An environmental disaster or another world war are constant threats playing on everyone’s minds. Although it is not clear how anyone can face up to these threats, some will simply try to flee, while others may feel more perplexed, as is the case with Selim.

An indolent hero can truly represent a social minority that is trying to confront what is happening now in Turkey. Before his aimless walks, Selim feels as though he is under house arrest; he apathetically observes the speculations regarding the causes of the accident, and he avoids participating in the imposed panic driven by media propaganda. When everyone around him goes to extreme measures, Selim appears to be the stoic fool of the town. Or is he the true rebel who decides to eliminate the smell through his own perspective? No clear answer is needed, as The Gulf succeeds in being a universal story that is not limited to the current events that Turkey is going through. There is one clear message, though: the smell is not easy to get rid of, and even though the city is now in a state of emergency, there is a modicum of hope that someone can fight it.

more about: The Gulf

“We live in a period of slow decay, and the smell won’t go away any time soon”

VENICE 2017: After a lengthy development process, Emre Yeksan’s feature debut, The Gulf, has been premiered in the International Critics’ Week; we talked to him about it

The third workshop of the 6th edition of the initiative will be held in Venice from 11 to 15 January. The selected projects come from Italy, Turkey and Hungary

VENICE 2017: Through an allegorical, dystopian story, debutant Emre Yeksan raises awareness of a possible catastrophic event, while making a clear social comment on his homeland 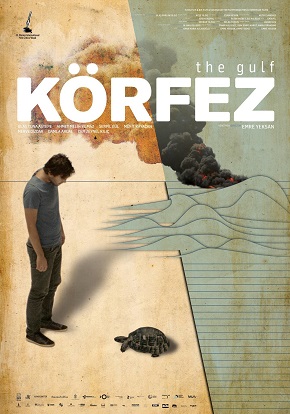