Silent Night: All is (not) calm

23/11/2017 - First-time director Piotr Domalewski takes a snapshot of a rural Polish family as they celebrate Christmas Eve – and in doing so, he scooped the Golden Lions and showcases his unique talent

It was the second time in a row that the top honours of the Polish Film Festival in Gdynia had been won by a debutant for a film that deals with family matters. In 2016, Jan P Matuszyński and his The Last Family [+see also:
film review
trailer
interview: Dawid Ogrodnik
film profile] took home the top prize, and this year’s winner was Piotr Domalewski, who wrote and directed Silent Night [+see also:
trailer
interview: Dawid Ogrodnik
interview: Piotr Domalewski
film profile]. He is one of those multitalented filmmakers – he was also trained as an actor and musician, and directed short films before moving on to his feature debut, a family drama infused with black humour.

The premise of the film is simple. Adam (Dawid Ogrodnik) comes home from his job in the Netherlands for Christmas, armed with euro bills, a small digital camera and a sonogram of his unborn baby. He returns only for one day, but his agenda is full to the gills and will be revealed slowly as the plot progresses. Adam confronts his family – his parents, siblings and cousins, who seem to be stuck in the discouraging setting of rural Poland. He, on the other hand, wants to leave the country for good and start a new life together with his pregnant girlfriend. But, as is the case the world over, the holiday festivities summon up the demons of the past, who will either be exorcised by Adam or will haunt him forever.

Silent Night inadvertently recalls Cristi Puiu’s Sieranevada [+see also:
film review
trailer
Q&A: Cristi Puiu
film profile] and Wojciech Smarzowski’s Dark House, but Domalewski is by no means a copycat, and in contrast with these two directors, he leaves his country’s political past out of the picture. He is an artist in his own right, using cinematic language with the proficiency of a world-class pianist, and always seeming to hit the right note. In Silent Night, he combines the simplicity of small-town life in a Polish village with the complexity of the characters he places in front of the camera; and then he steeps all of that in the mundane, non-photogenic problems of everyday life in his homeland. The quiet alcoholism, domestic abuse, loneliness, unemployment, frustration and need to leave the country in order to make a living – these are the tunes of Domalewski’s very unmerry Christmas carol. And yet in all this gloominess, there is a ray of bright light: family love, however imperfect and toxic, which keeps everyone together.

The ensemble cast’s performances are exquisite, and Piotr Sobociński Jr’s moving, ever-vigilant camera does an amazing job of capturing the intentionally subdued emotions that the actors bring to the scenes. Domalewski’s may be just the voice that Polish cinema needs: quiet, yet persistent – and most of all, not afraid to tell the truth.

The film was produced by Munk Studio, which also holds the international rights. The Polish distributor is Forum Film, and the film opens domestically on 24 November.

Polish writer-director Piotr Domalewski talks to Cineuropa about his stunning debut feature, Silent Night, which only purports to be a simple story on the surface

Silent Night: All is (not) calm

First-time director Piotr Domalewski takes a snapshot of a rural Polish family as they celebrate Christmas Eve – and in doing so, he scooped the Golden Lions and showcases his unique talent

“I don’t really pick a subject or a story; I focus on a theme”

Cineuropa talked to Piotr Domalewski, whose sophomore film, I Never Cry, was presented in San Sebastián’s New Directors section and was released in his native Poland in late September

Piotr Domalewski’s second film investigates an experience common to thousands, if not millions, of Poles in a manner that would make Ken Loach proud

VENICE 2019: In his superb new movie, Jan Komasa investigates the social dynamics of a small community that gets a new priest who hides his true identity

The Slovakian film gathering is creating Inspirational Days, the VFX Day and the TV Industry Day to facilitate the discussion of current topics in the domestic audiovisual landscape

The Polish director’s previous film, Silent Night, was one of the most frequently awarded Polish movies of 2017 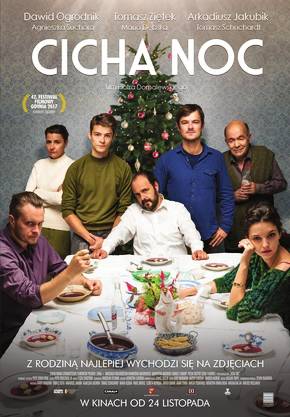