02/02/2018 - Award-winning playwright Paavo Westerberg makes his directorial debut with a slick, if slightly uneven, feature shown in the Nordic Competition at the Göteborg Film Festival

Matleena Kuusniemi in The Violin Player

Paavo Westerberg’s debut feature, The Violin Player [+see also:
trailer
film profile], screening in the Nordic Competition at the Göteborg Film Festival, opens with a line from Confucius, but one can’t help but wonder if perhaps he should have gone for Powell & Pressburger’s The Red Shoes instead. Especially the exchange between Boris Lermontov and unknown dancer Vicky Page, played so memorably by Moira Shearer: “Why do you want to dance?” “Why do you want to live?” “Well, I don’t know exactly why, but I must.” “That’s my answer, too.”

The story of famous violinist Karin (Matleena Kuusniemi), who is unable to play after an accident wrecks her left hand and is struggling to move on with her life, echoes the 1948 classic rather explicitly, even to the extent of having its characters discuss whether one should give up everything for their art. Westerberg references Miloš Forman’s Amadeus as well, cheekily trying to find similarities between Karin’s situation and Tom Hulce’s all-too-brief stint on the A list. But his is – for the most part – a much more composed affair, because Karin is no ambitious ingénue. She is someone who reached the top and then lost it all, which in a way makes her tragedy all the more touching.

Kuusniemi is very good here, quietly underplaying her character’s desperation. Stuck in the role of a housewife she has no intention of being, she eventually decides to pass her knowledge along, only to blurt out: “I am an artist, not a teacher!” Which brings us to Westerberg’s biggest problem, as he doesn’t quite know how to handle scenes of emotional turmoil. Karin’s relationships with her long-suffering husband (Samuli Edelmann) – apparently so clueless about his wife’s struggles that he actually gives her a violin-shaped cake for her birthday – and her twenty-something student Antti (Olavi Uusivirta), whom she seduces, quickly plunge into sillyville, culminating in one of them angrily gulping San Pellegrino. But perhaps that’s only fitting, as the only true love here is felt for the music.

There are some good, playful scenes, like a shared cigarette in a shabby-looking corridor mere minutes before stepping onto the stage. But there is no denying that the English dialogues sound a bit stiff (at one point, someone actually yells: “Let’s dance!”, as if just doing it wasn’t clear enough), and Westerberg occasionally stumbles over his own screenplay, co-written with Emmi Pesonen. This is surprising coming from a recipient of two Finnish Film Awards for Frozen City [+see also:
film review
trailer
interview: Aku Louhimies
interview: Markus Selin
film profile] and Frozen Land, both directed by Aku Louhimies, who recently set the local box office on fire with his new take on The Unknown Soldier [+see also:
trailer
film profile].

It’s probably a testament to Kuusniemi’s performance that once the attention switches to Antti (though why we are informed he practises pilates we will never know) and things get a little Whiplash-like, the film loses its strength. But for a first feature, The Violin Player is still rather effective, and Westerberg, already a recognised name in theatre, makes the transition quite smoothly. Let’s just hope that next time he will leave those white doves to John Woo.

The Violin Player was produced by Ulla Simonen and Mikko Tenhunen for Mjölk Movies, and financed by the Finnish Film Foundation, YLE and SF Studios. The international sales are handled by Mjölk Movies.

more about: The Violin Player

Award-winning playwright Paavo Westerberg makes his directorial debut with a slick, if slightly uneven, feature shown in the Nordic Competition at the Göteborg Film Festival 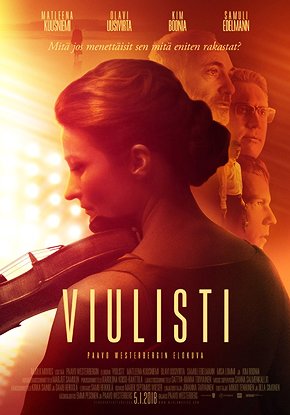 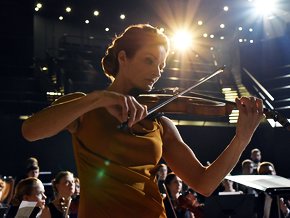