Using the methods of direct cinema (aka cinéma vérité), Ukrainian director Sergei Loznitsa has made Victory Day [+see also:
trailer
film profile], a documentary about the gathering that takes place every year on 9 May at the Soviet War Memorial in Treptower Park, Berlin. In 1965, the day was declared a public holiday in the Soviet Union – the so-called Victory Day. In Berlin, people come along for the morning ceremonies dressed up in their favourite Soviet military uniforms and lay wreaths and make speeches celebrating the victory of the Soviet Union over Nazi Germany.

In the movie, screening in the Forum of the Berlin Film Festival, Loznitsa trains his camera on the people gathering in the park, seemingly very taken by the songs being sung, and the speeches celebrating the power and might of the Soviet Union. It’s a celebration, but Loznitsa’s worry over what is happening becomes apparent through one clever edit when he aims the lens at a man wearing a blue T-shirt that has the word “President” emblazoned over a picture of Russian President Vladimir Putin, adorned by sunglasses. It’s abundantly clear just in the framing that Loznitsa wants to question the slogans and the attitudes of those at the parade, wondering why they are ignoring the history of the Second World War and the Soviet Union in blindly showing solidarity with not just Stalin, but also Putin, who has made much of celebrating the Soviet past.

Likewise, when we hear the roll call of the dead, we discover that the men who died fighting came from all over the former Soviet Union. In choosing these moments, Loznitsa makes us wonder whether the parade is really to honour the dead, or rather to set up the idea that this glorious past should make a return. As such, it’s a companion piece to 2016’s Austerlitz [+see also:
film review
trailer
film profile], in which the director filmed visitors to memorial sites of former concentration camps.

Perhaps aware that direct cinema and the failure to comment on the action will make some watching believe the information and the points of view being expressed by some of the speakers at the parade, Loznitsa introduces characters questioning the speakers, which seems rather clunky following the more subtle initial approach to the topic. “Learn your history,” screams one man, and that is exactly the message that the Ukrainian director of In the Fog [+see also:
trailer
film profile] wants to hammer home in this documentary. It’s a shame that Loznitsa decides to be so obvious, as one of the great attributes of direct cinema is that it treats the audience as intelligent people and trusts them to reach their own conclusions.

This Imperativ Film (Germany) production, co-produced by RBB and Lithuania’s Tauras, with the support of Germany’s Medienboard, is likely to be an acquired taste, especially as the running time feels somewhat stretched. Imperativ Film also handles the international sales.

“Our society is getting infantilised”

We met up with prolific Ukrainian filmmaker Sergei Loznitsa, who has presented three films this year: Victory Day, Donbass and The Trial 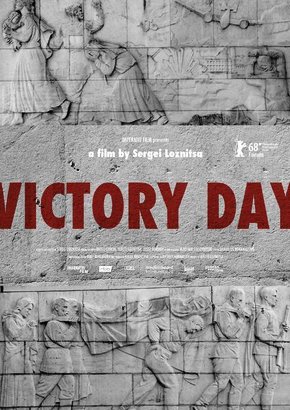 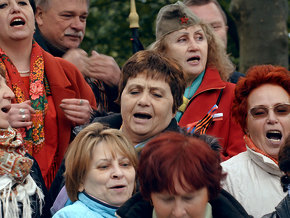 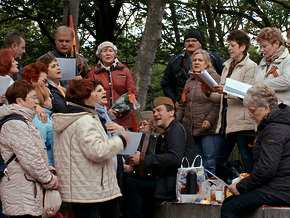 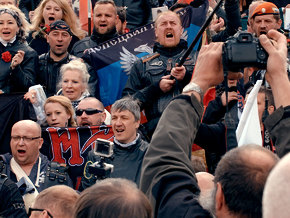 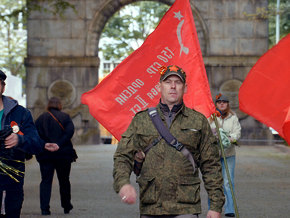