06/03/2018 - Nevio Marasović returns to the island of Vis with his offbeat comedy-drama, which world-premiered at Belgrade FEST

It seems there is a pattern to Croatian director Nevio Marasović’s filmmaking, in which after a brave and innovative (though sometimes out-of-control) piece of genre cinema comes a somewhat more conventional, yet very original, dramedy. After Goran [+see also:
film review
trailer
interview: Nevio Marasović
film profile], a snowy thriller with a distinctive absurdist and darkly humorous Coen brothers vibe to it, he is back with Comic Sans [+see also:
trailer
film profile], which world-premiered in the regional competition at Belgrade FEST, winning the “Nebojša Đukelić” Award for Best Film to boot (see the news). It will hit theatres domestically later in March. The Croatian director, working with the script he co-wrote with Rakan Rushaidat and lead actor Janko Popović Volarić, tackles the topics of relationships and break-ups, snobbery, family relations and the search for inner peace. If the title seems oddly familiar in the context of Marasović’s work, there is a reason for it: Comic Sans was the title of the film within the film in Vis-à-vis [+see also:
film review
trailer
interview: Nevio Marasovic & Rakan Rus…
film profile].

The story, however, starts off in Zagreb, with an awkward post-break-up meeting between an overworked but successful designer, Alan (Popović Volarić, collaborating with the director for the third time, after Vis-à-vis and Goran), and his ex-girlfriend Marina (the ever-excellent Nataša Janjić, known for the role of Lina in Goran), which leads to clumsy but passionate make-up sex. The next day, Marina leaves the apartment before Alan gets up and subsequently does not answer her phone. Alan and his co-worker Lukas (Serbian actor Miloš Timotijević, of Humidity [+see also:
film review
trailer
interview: Nikola Ljuca
film profile] and No One’s Child [+see also:
film review
trailer
film profile] fame) are about to botch an important job for their Slovenian employers, and Alan is losing his mind over the situation with Marina. After they meet again and she explains that it was all a mistake, the chaos in Alan’s head explodes, with disastrous consequences. His only way out is a retreat to the island of Vis with his father, Bruno (legendary Croatian-Danish actor Zlatko Burić, from the Pusher trilogy), an artist with whom he has some long-standing issues. What Alan does not know is that another of his exes, Barbara (Inti Sraj), is also on the island, together with her new fiancé, Peter (Miha Rodman).

At first, it seems that Comic Sans takes too much time to get its story under way, but it is merely a matter of expectations. A viewer trained in standard-issue comedy-dramas will be surprised that the trip to the island, with most of the island tropes found in Croatian cinema, happens only halfway through, so the change that Alan is bound to undergo has to be rushed. The trick is that Comic Sans is not one of these bog-standard comedy-dramas in which the protagonist gains a new perspective and changes his life completely in a matter of days. Yes, Alan will see things in a new light and some changes will occur, but they will be slighter and slower because the transformation has to overcome Alan’s ego, snobbery and long-standing patterns of behaviour.

What works perfectly in Comic Sans, apart from the title with more than one meaning, explored over the course of the film, is the actors’ interplay. Janko Popović Volarić and Zlatko Burić channel the energy of the troubled father-son relationship in a way that is both serious and humorous. They are both more-than-accomplished actors, and Marasović uses them well. That goes especially for Popović Volarić, who has to share the screen with a strong actress such as Nataša Janjić and with the slightly subdued but menacing alpha-male presence of Miloš Timotijević.

The cinematography by Marasović’s regular DoP, Damir Kudin, is also top-notch. Tasked with creating a mood that fits Alan’s character in corporate offices in Zagreb and Ljubljana, and his “creatively messy” flat, and then shifting it completely to the low-season island, Kudin does a great job of finding just the right nuance and not over-playing with clichéd images. The same goes for the repeated use of a kitschy pop ballad by Mišo Kovač as a theme song right from the start, which might seem an obvious choice, but that tune also adds a layer or two to Alan’s character.

Comic Sans was produced by Kinorama with the support of the Croatian Audiovisual Centre (HAVC).

Pity and Virgins triumph at the Montenegro Film Festival

Other winners at the 32nd edition of the Herceg Novi-based event included Let the Corpses Tan, Radu Jude's "...Barbarians" and Comic Sans

Croatia’s Barbara Vekarić tries to express the voice of the millennials in her debut feature, screening in the national competition at Pula

Nevio Marasović returns to the island of Vis with his offbeat comedy-drama, which world-premiered at Belgrade FEST 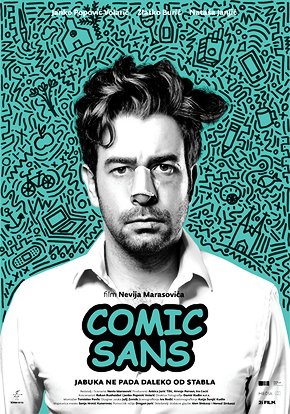