26/03/2018 - Alessandro Aronadio directs a comedy that plays on the religions, beliefs, myths and superstitions of our times, in Italian cinemas from 29 March

The nuns, all dressed in black, are beginning to slow down. The reference to the opening credits of Quentin Tarantino's Reservoir Dogs is obvious. Io c'è [+see also:
trailer
film profile], by Alessandro Aronadio (Ears [+see also:
film review
trailer
interview: Alessandro Aronadio
film profile]), offers us comedy from the get-go, mocking the religions, beliefs, myths and superstitions of our times by inverting their practices and rules.

Massimo (Edoardo Leo, I Can Quit Whenever I Want [+see also:
film review
trailer
interview: Sydney Sibilia
film profile]), is a classic Italian "rascal," the owner of a B&B in the centre of Rome, whose business is limited by tax constraints. He enviously watches as a convent run by nuns on the other side of the road welcomes in tourists, who leave spontaneous and lavish gifts at the end of their stay. All completely tax free.

Massimo realises that if he wants to avoid paying tax, he'll have to create a "place of worship." After trying to get into the more or less restricted circles of Catholicism, Judaism and Islam with a series of rather hilarious meetings, Massimo has a sort of "epiphany" and decides to create a new religion. Assisted by his accountant sister Adriana (Margherita Buy) and the boyfriend of his ex-wife Marco (Giuseppe Battiston), a sort of guru-writer with no actual readers, the protagonist comes up with “Ionism,” a religion that places the individual at the centre of the universe. "You will have no God but yourself."

At this point in the plot, it’s fairly easy for the writers (the director, along with Renato Sannio, Edoardo Leo and Valerio Cilio) to draw heavily on the myriad of improbable sects led by so-called enlightened preachers, with often entertaining results. By his own admission, Aronadio was reminded of the Pastafarian Church, founded in the USA years ago, which worships the Prodigious Spaghetto Volante, or, on a larger scale, the Assembleias de Deus, an evangelical movement in Brazil with millions of followers, claiming that God can manifest himself through anyone. Stubbornly secular and corrosive, to the point of risking offending the religious sensibility of those who aren't able to get on board with the parody, the film finds its strength in the slovenly figure of Massimo, who is well-assisted by his two co-stars, despite sometimes getting lost in harmless sketches.

It could be argued that this film ponders the idea that we can have ethics without a God, and human morality that works without religion. It could also equally be suggested that this film is a political commentary on the messianic rhetoric of certain movements, which is being expressed through new social channels.

The film, produced by Italian International Film, will be in Italian cinemas from 29 March with Vision Distribution.

Alessandro Aronadio directs a comedy that plays on the religions, beliefs, myths and superstitions of our times, in Italian cinemas from 29 March

The new film by the director of Ears is now in post-production; the cast includes Edoardo Leo, Margherita Buy and Giuseppe Battiston 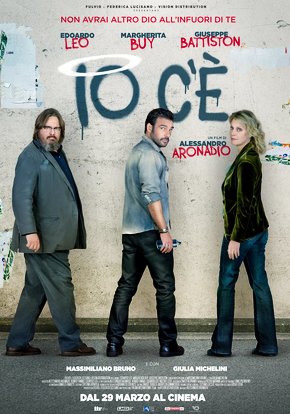 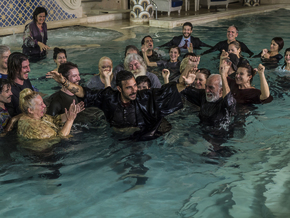 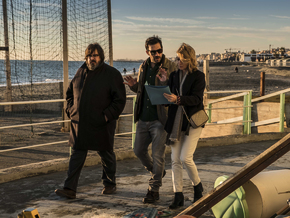