09/04/2018 - German director Ben Brummer presents a mixture of buddy comedy and drama, and his first feature to be released in cinemas

After training at the Filmhochschule in Munich and undertaking a series of film projects (The Subtle Hunter, Soap Bohème, Figaro's Monomyth) that were broadcasted on German television, Ben Brummer has released his first feature intended for the big screen, After-Work Beer [+see also:
trailer
film profile], in Germany.

The key setting for the titular leisure-time pursuit is Magnus' bar. This is where the melancholic thirty-something feels most comfortable, behind the counter and in the presence of a handful of his regulars. Actor Tilman Strauss personifies the taciturn and introverted dropout who compensates for his disappointing failure to attain a traditional family life by drinking alcohol, listening to music and demonstrating an almost fanatical devotion to his car, a 1980s Mercedes Coupé. His routine, based around the bar visits of his best friend, car mechanic and womaniser Dimi, as well as the appearances of the eccentric Manfred, a conspiracy theory nut played by Christian Tramitz (Manitou’s Shoes, (T)Raumschiff Surprise, Bullyparade: The Movie [+see also:
trailer
film profile]), careers off the rails when his car suddenly goes missing. But while this premise may seem promising, the story steadily loses itself in marginal and fairly conventional narrative strands.

After-Work Beer begins as an accurate depiction of a particular milieu, and turns into a buddy comedy and scavenger hunt, before the love story becomes increasingly dominant, thus emphasising the sentimental and weakening the tragi-comic dimension. The script is sorely lacking in consistency, and it would have been a good idea for the story to focus on one narrative strand, which would also have tightened the pace of the narration. The dialogue is often too artificial and overstated, and many of the motifs appear in other films, albeit with slight variations. For instance, the theme of the “barman” as a disillusioned intellectual is used in many movies and literary works (see The Good Heart [+see also:
trailer
film profile] by Dagur Kári or The Drop by Michaël R Roskam), which makes it hard to come up with new ideas.

One of the film's distinct strengths is the atmosphere it conjures up, which is produced through a meticulously created setting and the choice of music, as the blues tunes by composer and singer Dr Will emphasise the melancholy of the main character. But it's the mise-en-scène that shows off Ben Brummer's skills, and this also goes for the sophisticated way he composes the images, adeptly playing with light and shadow, as if it were a film noir. The film also boasts a very convincing cast, especially Tilman Strauss as Magnus, but also Johann Jürgens as Dimi and especially James Newton as Bene.

An intriguing element that appears from the very beginning is the car, which functions as a fetish object evoking and simultaneously encompassing Magnus' emotions. He feels comfortable in it, and it seems as though it replaces his need for interpersonal relationships, which have only disappointed him so far. The car also works like a Pandora's box: as long as it stays closed, its content is secure. When the car is stolen, Magnus loses his composure. The vehicle is also in a way a projection of his identity, which also gets out of hand after the loss. His search for the car takes him back to his past, confronting him with his repressed frustrations and finally allowing him to make amends for his mistakes before he dares to start anything new. After-Work Beer is therefore also a film about an inner journey, the outcome of which could easily have involved a braver twist.

After-Work Beer celebrated its premiere at the 2018 Berlinale, is a Gaze Film production and is being distributed by One Filmverleih, which is also in charge of its international sales.

German director Ben Brummer presents a mixture of buddy comedy and drama, and his first feature to be released in cinemas 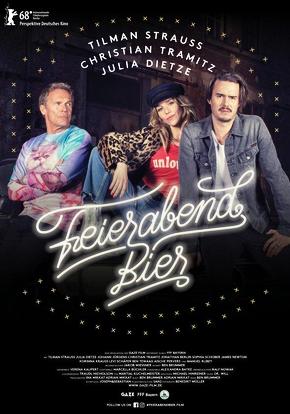 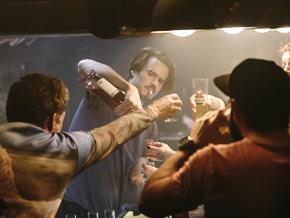 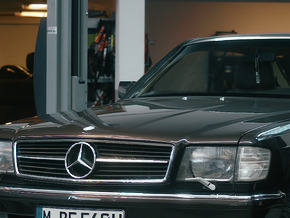