10/04/2018 - Director Nico Cirasola tells the story of the famous star of silent cinema’s return to Puglia, his native land, using visionary techniques to weave the present and past together

Rudolph Valentino was the first great “divo” in the history of cinema. But we're not talking about Hollywood here, which devoted five to six films to him per year, but his native region of Puglia, where his compatriot Nico Cirasola has chosen to tell his story, starting with a true fact: the return of Valentino to his home town of Castellaneta in the province of Taranto in 1923, while at the height of his worldwide success. Cirasola’s film focuses on both the joy and sorrow tied to this star emigrant, who became the emblem of the American dream while Italy plunged into fascism. Rudy Valentino, the opening film at the 19th Lecce European Film Festival (9 to 14 April), is a very unconventional homage to the "star of all stars," who died at just 31 years of age: weaving together reality and fantasy, the present and future, and catapulting the famous Latin lover into modern times, highlighting his dark side and contradictions.

The film kicks off in the present day, with a show that a stubborn and passionate theatre custodian (Nicola Nocella, recently seen in Easy [+see also:
film review
trailer
interview: Andrea Magnani
film profile]) is rehearsing about Rodolfo Valentino’s visit to Castellaneta with a somewhat ramshackle amateur theatre company (starring Alessandro Haber). At a certain point, a handsome and elegant man bursts onto the stage with a refined American woman on his arm, dressed in ‘20s clothing: it’s the real-life Rudy Valentino and his wife, Natacha Rambova, played by Pietro Masotti (Martino's Summer [+see also:
trailer
making of
film profile], 10 regole per fare innamorare [+see also:
trailer
film profile]), who is right on the money, and Tatiana Luter (Summertime [+see also:
film review
trailer
film profile]). After the initial bewilderment, reality begins to mix with fiction, and from there onwards the film flits between various show rehearsals, with reconstructions of the past, in a constant coming and going between the 20th and 21st century.

At the centre of everything is Rudy's journey back to his roots after emigrating to the United States at just eighteen years of age. Cirasola stated that he "imagined him at the centre of the contradictions of the American dream: the emigrant's journey from southern Italy, his dream of popularity coming true, and the appeal of the seducer. But also, on the flip side, the nostalgia of your home country, familial conflict, provincialism, and disappointment." Valentino's visit to his home town is an extraordinary opportunity to reconnect with his loved ones (including his beloved aunt played by Claudia Cardinale, and his elder brother, played by Luca Cirasola), but slowly turns into a sort of nightmare, due to the unbridled devotion of his countrymen, who do nothing but ask him to dance the tango for them, the criticism of his effeminate appearance, his uninhibited wife and the fact that he went to live the good life in America while his family was racked with debt. Not to mention the prejudice, backwardness and references to il Duce…

The continuous passage from the past to present, very marked photographically, doesn’t necessarily contribute to the film’s strengths, and its inhomogeneity hinders the audience’s empathy. Written by the director, along with Lucia Diroma and Luigi Sardiello, Rudy Valentino is an unusual and audacious film, certainly appreciable due to the topicality of its central theme (that of young people forced to leave their home town and the nostalgia they carry with them), a film about the price you pay to pursue your dreams, and an ode to those who have the courage to take a gamble in life.

Produced by Alessandro Contessa for Bunker Lab and by Mediterranean Film, Rudy Valentino is due to be released in Italian cinemas in May. The film had its world premiere at the 20th Shanghai International Film Festival.

Director Nico Cirasola tells the story of the famous star of silent cinema’s return to Puglia, his native land, using visionary techniques to weave the present and past together 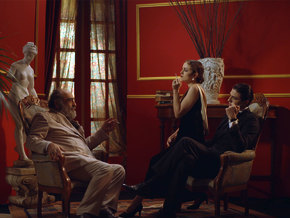