11/04/2018 - Diego Perucci directs the first documentary dedicated to the famous writer: a journey through his life and the places he lived in Italy and Portugal

Se di tutto resta un poco. Sulle tracce di Antonio Tabucchi [+see also:
trailer
film profile] is the very first documentary dedicated to the famous writer, directed by Diego Perucci and in Italian cinemas from 16 April. Produced by Giuseppe Cassaro and Samuele Rossi for Echivisivi, in association with Dottor Cardoso, the film will be premiering in cinemas in major Italian cities via Movieday.it, the first Italian on-demand film platform, and then on TV on Wednesday, 25 April at 9.10pm on laF – Feltrinelli’s TV channel (Sky 139).

Six years after his death on 25 March 2012 in his beloved Lisbon, the film pays tribute to Tabucchi, one of the most important authors and intellectuals of the late twentieth century, translated into over 18 languages ​​and the author of various masterpieces such as Notturno indiano and Sostiene Pereira. Tabucchi was also the Italian translator of many of Fernando Pessoa’s works, a university lecturer in Siena, Genoa, Bologna and one of the most active and brilliant intellectuals of our time.

Guided by Giorgio Colangeli’s narrative voice, Se di tutto resta un poco is a journey into the life of the Tuscan writer and his works through the places he lived in Italy and Portugal. "Perhaps this journey can give us a bit of wisdom, that the ground we walk on doesn’t belong to us," says the voice of Tabucchi, who never appears in the documentary. Like postcards, the images of his favourite places flow onto the screen: from Siena to Vecchiano, his native village (which he called his "refuge",) before continuing on to Genoa, Florence, Rome, and arriving in Pisa and Reggio Emilia, places that have marked his literary and academic career. The journey continues overseas: from Lisbon, the central city of his long artistic career and where he is now buried, to Paris, where the Tabucchi Fund is held at the National Library of France. And it is the people who loved him the most who tell his story with fresh and emotional insight: his wife Maria José and son Michele, who emphasises how his father, who was a troubled and unsettled character who "felt isolated in his own country," but a free citizen of a free world. As well as friends and colleagues, including the writers Paolo Di Paolo and Maurizio Bettini, the literary critic Paolo Mauri and the actor Massimo Popolizio. "I preferred to play my music not with an organ, which is an instrument that belongs in cathedrals, but with a harmonica, which you can keep in your pocket, or an accordion, which you can take to the streets." A piece of wisdom, his own, which was destined to be his last. A journey that ends at the chapel of the Portuguese writers in the Cemiterio dos Prazeres in Lisbon, where Tabucchi was laid to rest next to a notebook and pen. "Because – remembers the director - writers, as Tabucchi used to say, can’t go anywhere without being able to take notes at any potential moment in time."

Diego Perucci directs the first documentary dedicated to the famous writer: a journey through his life and the places he lived in Italy and Portugal 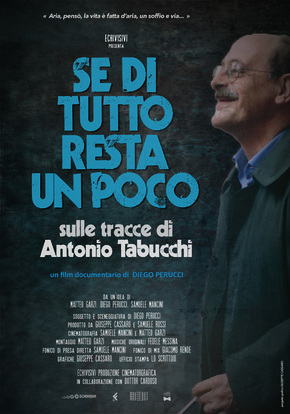