Funny Cow [+see also:
trailer
film profile] is an engrossing look at the efforts of a stalwart woman (Maxine Peake) to change her life by making inroads into the male-dominated world of stand-up comedy. Directed by Adrian Shergold and written by Tony Pitts – who also plays the comedienne’s abusive husband – the film, which takes place in working men’s clubs and inside northern houses, has an aesthetic and style that are reminiscent of the northern-set, free cinema, kitchen-sink dramas of the 1960s directed by the likes of Tony Richardson and Karel Reisz.

At the centre of everything is a towering performance by Peake, whose character goes by the nickname “Funny Cow”. The film originated when Peake met Pitts while they were both working as actors on James Marsh’s Red Riding: 1980. Pitts wanted to write a film for Peake, and Peake admitted she had a fascination with the performers who did the working men’s clubs circuit. Peake’s infatuation is seen in her far-flung performance. She is both vulnerable and resilient when being violently abused by her husband (in the flashback scenes where we witness the abuse she received at the hands of her father, the Young Funny Cow is played by Hebe Beardsall). The resistance that she builds up to violence comes in handy when she is faced with hecklers and misogynists while performing on stage. The film doesn’t shy away from the more savage aspects of the period being depicted either, or try to make the protagonist more sympathetic, as Funny Cow is not immune to using racist or homophobic material as she plays to the crowd.

Outside of her family, there are two important men in her life. There is Lenny (Alun Armstrong), an ageing comedian who has been around the block one too many times; even he finds it hard to listen to his own material. He lives up to the stereotype of the unhappy clown. One of the only times the camera leaves Maxine, it is to follow Lenny into the dank toilet of the club. It's Lenny’s refusal to cave in and be beaten that inspires Funny Cow. He also isn’t completely dismissive of Funny Cow’s desire to become a comic, even though the only women who perform at working men’s clubs are strippers or singers. Then there is Angus (Paddy Considine, delivering a nuanced performance), a bookshop owner who seems as though he could be her saviour, but the film is far too smart and too damning of masculinity to let this woman be saved by anyone but herself. Despite being a little too schematic and in spite of the occasional cliché, this is powerful stuff, and it’s no surprise that veteran TV director Adrian Shergold has already moved on to his next female-led production, Cordelia (see the news). 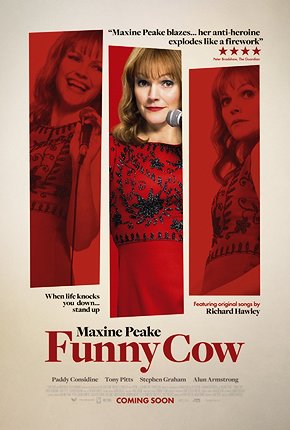