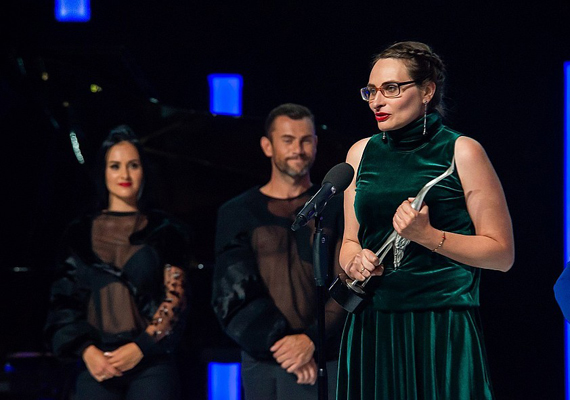 Director Eglė Vertelytė receives one of her Silver Cranes for Miracle

The deadpan tragicomic satire Miracle [+see also:
film review
trailer
interview: Eglė Vertelytė
film profile] by debutant writer-director Eglė Vertelytė has conquered the 11th Lithuanian Film and TV Silver Crane Awards by taking home a total of four Silver Cranes, including Best Feature Film of the Year. The annual ceremony was co-organised for the first time by the Lithuanian Film Center, which is becoming actively involved in the awards, and the Lithuanian Film Academy, and it took place at Vilnius’ LITEXPO Exhibition Center on Wednesday 13 June, broadcast by Lithuanian National Television (LRT).

The Toronto-premiered satire was nominated for six Silver Cranes, and apart from Best Film of the Year, it also snagged the Best Director and Best Screenplay Awards, both for Vertelytė, while the fourth major gong, the Best Actress Silver Crane, was bestowed upon the film’s leading actress, Eglė Mikulionytė.

The Best Actor Award was given to Giedrius Savickas for the local comedy Three Million Euros, while Joris Baltrūnas received the Best Supporting Actor Silver Crane for his performance in Breathing Into Marble [+see also:
film review
trailer
interview: Giedrė Beinoriūtė
film profile] by Giedre Beinoriute, which was nominated for four more Silver Cranes and is taking part in the East of the West competition at this year’s Karlovy Vary International Film Festival.

The sports documentary Wonderful Losers: A Different World [+see also:
trailer
film profile], directed and co-produced by Arūnas Matelis, which aims to shed light on the lesser-known professional cyclists who always ride at the back of their groups, went home with two Silver Cranes – for Best Documentary and Spanish composer Alberto Lucendo’s work on the score – while it was also the film that received the most votes for the LRT.lt Audience Award.

Another documentary, The Ancient Woods [+see also:
film review
trailer
film profile], which was filmed in one of the last remaining patches of old-growth forest in Lithuania, and which was written, directed, co-produced and lensed by Mindaugas Survila, received the Best Cinematographer Silver Crane. Also, sound designers Saulius Urbanavičius and Jonas Maksvytis were presented with the Best Professional Work Silver Crane.

The prestigious Golden Crane – Lifetime Achievement Award went to distinguished cinematographer Algimantas Mockus for his contribution to Lithuanian cinema; he is best known for his collaboration with Arūnas Žebriūnas on The Beautiful Girl (1969) and Devil's Bride (1973).

Here is the full list of winners at the 11th Silver Crane Awards: