Review: The Devil Outside

Noah Carson in The Devil Outside

Andrew Hulme’s debut film, Snow In Paradise [+see also:
film review
trailer
interview: Andrew Hulme
film profile], was screened at the Un Certain Regard section of the Cannes Film Festival back in 2014, and featured a lead character who saw Islam as a way out of his gangster lifestyle. Religion is likewise central to Hulme’s sophomore effort The Devil Outside [+see also:
trailer
film profile], world-premiered at the Edinburgh International Film Festival, but whereas in his debut film, religion represented the road to salvation, here the tables are turned.

The Devil Outside follows a young, inquisitive but shy child, Robert (Noah Carson), as he begins to question the blind faith of his Christian parents. Having been home-schooled for most of his childhood, Robert must now go to secondary school where, for the first time, he learns about the theory of evolution and is introduced to the idea of a world which has no God. He starts to wonder whether science might be a better source of insights for him on life, the universe and everything in between. At church, meanwhile, he meets a young teen from the wrong side of the tracks, the impish Marcus (Daniel Frogson), who is scathing at the idea of any kind of divine omnipresence and is more than a little familiar with the workings of internet pornography. Is Marcus the devil? Or is it Robert we should be worrying about?

This is a movie reminiscent of Pier Paolo Pasolini in its pacing, its subject-matter and its markedly austere tone, and it’s not a million miles away from the horror film genre. Robert’s nameless mother (Keeley Forsyth) rules the roost by way of the wordless looks she casts at her nearest and dearest, and the menacing stares to which she subjects them. She becomes enamoured with lay preacher, David (Mark Stobbart), who first introduces himself to the congregation by declaring that the country “has become Godless, we have hidden our faith and are embarrassed to be known as Christians.” He’s also convinced that God has been sending him signs. Robert’s father (Alex Lowe), meanwhile, is a more gentle soul, who tries to persuade his son to listen to his mother and to follow the path of Christ. All these influences, along with a distinct uprising in his own testosterone levels, leave Robert in a state of confusion. A chance discovery in a woodland has Robert convinced that he too has received a sign from God, a claim that ensures his popularity both at home, and at the church, set in a former mining village in Nottinghamshire.

The topic of religion in a secular society is a fertile and engaging one, and Hulme’s is an arresting approach to storytelling. He does, however, on occasion, rely too heavily on chance and coincidence to power the film along, which sometimes makes for a plodding pace, but also clashes with the director’s expert handling of the internal contradictions running wild within Robert, such as in the scene where the lead’s mother stumbles across him in the woods, just as he’s making a crude declaration of desire to a female admirer of his. Plot flaws aside, The Devil Outside, is a handsomely shot, well-acted and engaging examination of faith and science.

The Devil Outside is produced by Christine Alderson for British outfit Ipso Facto and co-produced by French outfit The Jokers, with funding from UK’s BFI, Lipsync Post, Headgear and Backup Media. International sales are handled by Protagonist Pictures.

more about: The Devil Outside

Review: The Devil Outside

Other EFM titles include God’s Own Country, The Dinner and Tom of Finland 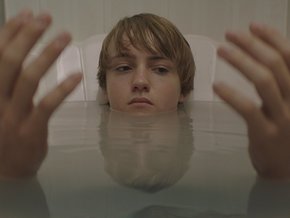