03/07/2018 - With his third feature, world-premiered at Munich, Oliver Haffner pierces through to the core of the political games that serve higher industrial interests

Peeling away layers of human nature is the tactic that German director Oliver Haffner used in crafting his third feature, Wackersdorf [+see also:
trailer
film profile], a slow-paced political thriller inspired by true events, which has world-premiered in the New German Cinema section of the Munich Film Festival. Rather than going for action-packed entertainment, Haffner pierces through to the core of the political games that serve higher industrial interests, played with such discreet cunning that they almost go unnoticed.

Dark clouds loom over the Bavarian district of Schwandorf, which has been hit hard by the industrial crisis. The year is 1981, and hundreds of miners have been left without jobs, fearing evictions and foreclosures. Instead of solutions, people are offered platitudes by their district's official administrator, Hans Schuierer (Johannes Zeiler). Faced with the biggest challenge of his career, this provincial politician is stumbling in the dark.

Seeking a way to fix the high unemployment rate, Schuierer is confronted with the local population’s totally justified frustration and anger. His office has never been busier and hopes never lower. But an unexpected visit by one of the Ministers of the German state of Bavaria (Sigi Zimmerschied) seems to offer a solution to his plight, as he learns about the government's industrial development plans for the region, with guaranteed jobs for about 3,000 people. For Schuierer and other local politicians, including his friend Josef Bössenecker (Peter Jordan), it seems like the end of a nightmare they have had to endure since the closure of the mine. No serious questions are asked beyond the number of jobs that will be created.

Initially unaware of the potential irreversible damage associated with a nuclear reprocessing plant that the ministry hopes will be a region-saving project, Schuierer is confident that the economic future of his district is secure. He is flattered by the attention that another official from the upper echelons, shrewd politician Karl-Heinz Billinger (Fabian Hinrichs), shows as he uses friendly overtures as a preventive measure against opposition. Blindly dedicated to the cause until he sees the first signs of repressive measures being used against the villagers, Schuierer finds himself in a time loop. "It's like with the Nazis, like in the Third Reich," he mumbles while observing a watchtower being torn down on a local farmer's private property. The law is broken by the protectors of the law themselves as the police carry out the orders of their high-ranking political bosses in Munich. But after an eye-opening encounter with local opposition activists led by Monika (Anna Maria Sturm), Schuierer changes course – for good.

Haffner takes a keen interest in the mechanisms of persuasion and manipulation that keep a corrupt government running, but even more in civilian courage. By turning his focus on Hans Schuierer, who gained notoriety in the 1980s when he rejected the approval of a nuclear plant, defying disciplinary proceedings from the Bavarian state government, he also shows the power of a small group of activists that grew into an organised movement. Haffner manages to capture the flavour of provincial Bavaria with the script he penned in a thick local dialect together with Gernot Krää. Credit is also due to Christian Röhr for his subtle costume design and to the band Hochzeitskapelle for their folkloric-elegiac score.

Wackersdorf was produced by If…Productions and was co-produced by BR and ARTE, with support from Bavarian Film Funding, the Ministry of Culture and Media, and the German Federal Film Fund. The international sales are handled by Alamode Filmdistribution oHG.

Wackersdorf, Irina and Before the Frost were also among the winners of the emblematic Iranian international film event, which has managed to withstand harsh financial sanctions

Doris Dörrie will be the guest of honour at this year’s event, kicking off on 10 April and featuring a retrospective on female German directors

All Good shines at Munich

With his third feature, world-premiered at Munich, Oliver Haffner pierces through to the core of the political games that serve higher industrial interests 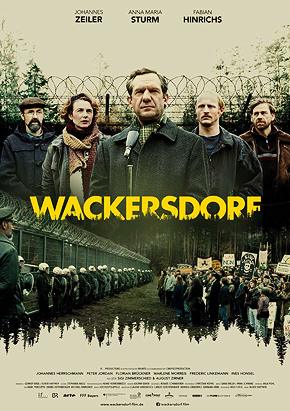