05/07/2018 - KARLOVY VARY 2018: Adam Sedlák's first film is a marital drama with elements of horror, which is neither sufficiently scary nor dramatic enough to really work on either level

Young Czech writer-director Adam Sedlák's first feature film, Domestique [+see also:
trailer
interview: Adam Sedlák
film profile], which has just world-premiered in Karlovy Vary's competition, is a marital chamber drama with elements of horror, which is quite a new trend in Czech cinema. However, while its atmosphere of dread and sterile design are remarkable, there is too little human drama in it, and way less horror than the set-up promises.

Roman (Jiří Konvalinka) is a top-level cyclist trying to get back into shape after an injury. His wife, Šarlota (Tereza Hofová), is a schoolteacher whose main preoccupation is trying to get pregnant. And instead of working together on these goals, each concentrates on his or her individual objective: Roman rents an oxygen tent for both of them to sleep in (hardly a turn-on, unless you are into strange fetishes), takes all kinds of supplements and undergoes what seems to be illegal blood cleansing. Šarlota, on the other hand, decides it is not beneficial for their chances to conceive if they eat meat or gluten – which is definitely a problem for an athlete. The two drift apart emotionally, and their bodies increasingly deteriorate…

Most of the film is set in their flat, a sterile home dominated by white and grey colours. This setting and the atmosphere are reminiscent of Goodnight Mommy [+see also:
film review
trailer
interview: Severin Fiala and Veronika …
film profile], but this turns out to actually be detrimental to audiences' reception of the movie. Domestique certainly feels like a horror flick but delivers very little on this level, so expectations remain unfulfilled. It is almost as if the filmmakers feared going all the way into this territory, and it’s a pity, because there are so many great opportunities in it for body horror. Instead, after the overlong exposition, the film becomes very repetitive in the points it is making, and this goes on for a definitely overlong 119 minutes.

Moreover, the drama between the couple seems artificial, despite its obvious plausibility and well-established motivations. There are petty squabbles and resentment, and also big arguments, but the relationship feels more like someone put two strangers in a house to live together and pretend to be a couple of four years.

Also, the decision to isolate them from the outside world, showing almost no other characters or settings, prevents the audience from really feeling the pressure that top athletes are under. There is no visible competition for Roman, who trains on a stationary bicycle, and as far as we know, he might as well be delusional in his idea that he is a great cyclist, despite the trophies we see in the hallway – distant enough from the camera for us to be able to expect it might be part of a plot twist. The synopsis informs us that he "is a domestique, a top road cyclist who takes direction from the pack leader during a race. But he’s had it up to here with thanklessly fighting for the team and wants to go after his own individual success." There is, however, no evidence of this in the film itself.

On the plus side, the minimalistic concept is well executed, especially Dušan Husár’s restrained and disciplined cinematography, and the aggressive score by Prague band Vložte kočku.

KARLOVY VARY 2018: Cineuropa met up with rising Czech filmmaker Adam Sedlák to talk about his minimalist civilisation horror Domestique, its influences and working with a low budget

Interview: Michal Hogenauer • Director of A Certain Kind of Silence

Cineuropa talked to debutant Czech filmmaker Michal Hogenauer about his movie A Certain Kind of Silence, the banality of evil, genre filmmaking and minimalism 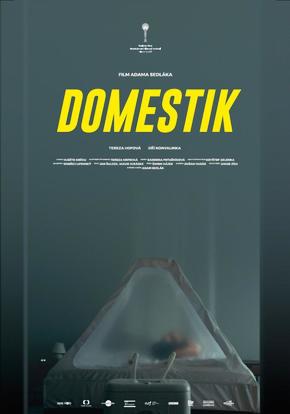