It’s not often that television and film present us with such happy and effective complementarity. But this is indeed the case in Tomáš Bojar’s Breaking News [+see also:
trailer
film profile], screening in the Documentary Competition at the Karlovy Vary International Film Festival, which closely monitors a Czech newspaper and the local television station as they scramble to cover a “newsflash”. At stake was the coverage of the possible and widely expected announcement of President Miloš Zema's reinstatement on 9 March 2017, a moment that had been prepared to take place in Prague Castle, along with a few hundred friends and supporters, but also as an event closed to the press. It becomes clear that this moment in itself was actually the least interesting, as it was just a miscellaneous news item, as most of the news tends to be in general. And indeed, in the film, we see this moment as nothing more than two minutes of grainy pictures on a TV screen. Much more interesting is what is going on behind the scenes: it is the raison d’être of this film, making it one of the most in-depth records of the rigour of great journalism – something that is not always recognised as such.

In the editorial office of Czech Television, and also on the premises of the Hospodarske Noviny newspaper, it seems to be “business as usual”, despite the added challenge presented by the lack of facilitation for the press to cover this particular news item. Although Bojar’s camera does not seem to improvise a great deal, it clearly has no way of controlling how the day’s events will unfold. The protagonists of the story then enter the scene: a huge cast that includes the directors of both media outlets, political editors, video editors, reporters, several journalists for an extended report, commentators – in a sense, the very backbone of both the newspaper and the TV station, for an event lasting only a few minutes, but one which would make headlines around the world.

The teams’ mission was to plan this report, this “scoop”, albeit outside the castle, and anticipate both decisions, although the re-election option was more widely expected. In a way, Bojar had quite a similar job on the front line, designing his clever and precise mise-en-scène according to the script of the unfolding narrative. And even an unforeseen event such as a sudden rain shower just prior to the announcement, or a brief breakdown in communication with the reporter, imbues this “breaking news” with additional meaning and pathos.

Interestingly, Breaking News is also the title of a film screened at last year’s Karlovy Vary, directed by Romania’s Iulia Rugina, although that movie was used more as a template to tackle a family relationship. However, if we combined that film with the ethics of, let’s say, Spielberg’s The Post and added a dash of TV, we might end up with something approximating Bojar’s Breaking News.

Breaking News was produced by Czech outfit Cinema Arsenal, in co-production with i/o post, Sounderground and Bystrouska. It is being sold by Cinema Arsenal. 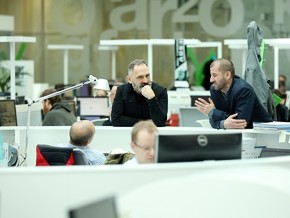 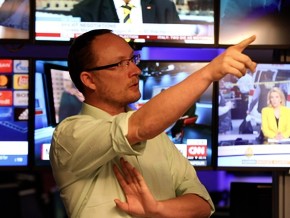